An Incident With A Mouse 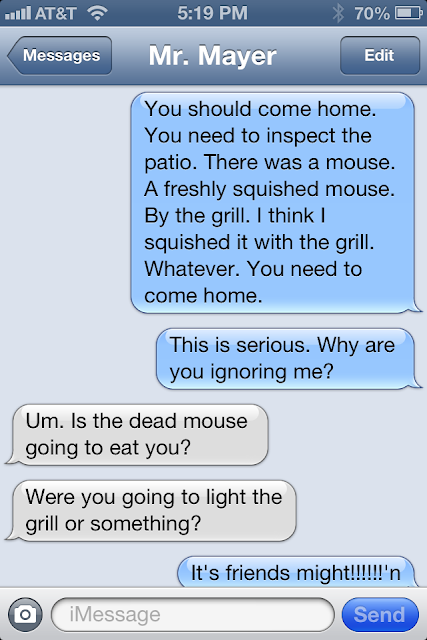 Yup. True story. That's how my afternoon went. I'm sure I have the Bubonic Plague or Rabies or something else horrific. I watch the Discovery Channel. The Today Show did a show last week saying that diseases from the past are on the uptick.
I don't like mice, rats, or any other small furry creature that is mouse looking. They creep me out. They are on my short list with snakes and roaches. I get a little panicky just thinking about them. You can imagine how calm cool and collected I was this afternoon. Mr. Mayer wasn't taking me seriously. Now, since then, I have sat in this house completely paranoid that there are mice inside somewhere. I feel my heart rate increasing as I type this.
In addition to the Mouse Incident there was ANOTHER EFFING POOPCAPADE!!!!! Grrrrr....I have expressed my disdain for poo and anything poo related. However, I keep getting stuck cleaning the stuff up. I was super distracted by the impeding mouse invasion. The Dudes had been pulling charcoal out of the grill for over a week. I keep putting it back in, scolding, and repeat. I covered the grill after I murdered a mouse and the Dudes moved on to the chiminea. They had been pulling lava rocks out of it. I was hunting mice. Carter was off playing with his rocks. Owen was "mowing" the grass. Then Carter walks over, holds out his hand and says "Ewww...." I glance. Dirt. Wait. Second glance. WTF?!?!?! It was not dirt. It was poo all over his hand. His feet. His legs. His arms. His MOUTH! I threw up a little. Where did poo come from? I scooped the backyard. I clean him up and send him on his way. Yeah. I'm super brilliant. A little bit later I look over at him sitting at his table (we are outside~thank goodness!) and he is on his knees. There is something on his foot. Poo. Ugh. Then I notice he is still playing with his rocks. Those are funny looking ro.......OH CRAP! Literally. It was crap. He was playing with crap. Then I look at Owen. Owen was still mowing. With rocks in his hand. They weren't rocks. He was holding poo as well. I mean seriously. I grab my antibacterial wipes and start scrubbing the boys. I might add at this point that the Dudes thought this whole process was hysterical! I scrub the Dudes, find the poo source. Scowl at the dogs. Not only did they not help at all with the mouse situation, but they keep pooing after I scoop. Sheesh. Worthless lap dogs :)
My neighbor's were outside this afternoon. I can only imagine what they were thinking today. I'm just giving them more evidence that I'm crazy.
Mr. Mayer finally made it home. An hour after I text him. I don't think he realizes what is going to happen if indeed a mouse does get into my house. He's poked around the backyard. Said he didn't find any evidence of mice other than the aforementioned deceased mouse. I think he was just humoring me.