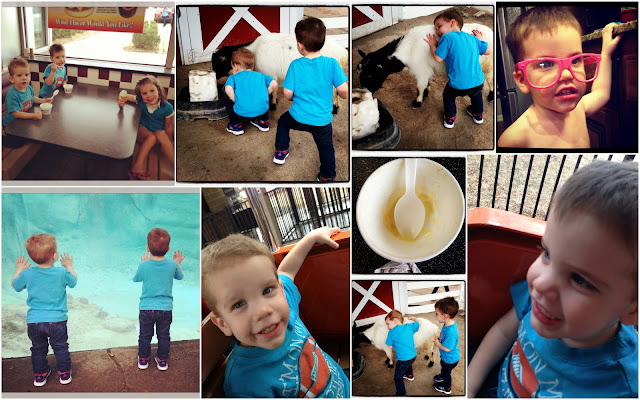 The weather men around here had been saying for a week that the weather today was going to be great.  I had made some plans with some friends to meet at the zoo this morning. I was excited. We NEEDED out of the house. Between illness and crappy weather we were going a little stir crazy. So this morning I made some lunches and loaded the Dudes into the van and away we went. Don't tell Diva! She will be ticked if she knew we went to the zoo without her! Instead of loading up the gigantic stroller I took our wagon today. The Dudes were so excited. When we go there it was me and my two kids, Jennifer and two of hers and Megan and her two. That was about it. It was like our own private zoo. The kids were able to walk run around. Every animal we saw they had to tell "bye bye" when we started walking off to see something else. Those guys ran their little legs off.
Today was a humid day. It rained yesterday and the ground today was wet. The concrete was slick. Owen is accident prone. He took off running and face planted into the sidewalk. It sounded like a ripe watermelon hitting the ground. That tough kid stood up and put his hand on his head and said "Ow. Hurt head Mommy." I picked him up. I gave him a kiss and he was off running like nothing ever happened. He had a nice red goose egg on his forehead as a reminder. Don't worry, he face planted two more times while we were at the zoo. Didn't phase the kid.
We went into the petting zoo. I won't lie. I don't like the petting zoo. It grosses me out. The Dudes were having a great time. The both insisted on hugging every animal in the place. Ick. There was one point I thought Owen was going to lick the salt rock that a goat was enjoying. Whew! He didn't. Around lunch time we found a table and the kids had a little "picnic." Then we let them go and play on the playground. After the playground we rode the "choo choo" back to the front of the zoo. This was a very big deal. Those were some excited kids. And they were such good little guys riding the train and waving at everyone and everything we passed. When we got to the front of the zoo we all unloaded. I grabbed the wagon and sat the guys down in it. I got in front of Megan and Jennifer and was pulling the wagon and walking backwards talking to them. Next thing I know there was a shift in the sidewalk. I stumble and fall flat on my backside right there in the middle of the zoo. Megan and Jennifer look on in horror. Then as soon as they realize I'm okay those shocked faces turn into smiles. I just laid there a second laughing. I can't believe that happened. I get up. Brush myself off and carry on. We say our goodbyes and I head home. Carter passes out half way home. He had a momentary rush of energy when we got home and I laid him down for a nap. It was very brief. They were out for the count. After we picked Diva up from school (and did not tell her about the zoo) I decided to take the kids to get ice cream and to the park. It's supposed to be stormy tomorrow. Need to take advantage of the good weather! Ice cream and the park were the perfect way to spend the afternoon. When we got to Braum's the kids start running toward the door and.....Owen trips and face plants into the sidewalk. Now he has another red goose egg right next to the one from this morning. The kid gets up and takes off running for the door. Didn't even say "ow." I'm fairly convinced he needs a helmet at all times. Tonight his forehead is very pretty. We ran and played at the park for almost 2 hours. Needless to say bedtime was not protested. Yes! My plan worked!