By Jayna Mayer August 23, 2016
Hey y'all! Surprise!! I know, I know. Life happened. Just to catch everyone up since my last post....a year ago (whoops!) here is the highlight reel of what has happened in my little corner of the world:

-I started working from home. It's been a bigger adjustment than I expected, but getting easier, maybe? Cause that's what I should be doing now instead of tending my very neglected blog.

-My Dad had Alzheimer's and he lost his battle in January. Much of last fall was spent traveling south to help. Then I had to take a few months away from it all and get my mind right. Don't worry. My mom is still around and still crazy.

-None of the spawn was kicked out of school last year. Woot! Woot! Crossing our fingers for this year!

-We only suffered one concussion, one split open face that required gluing, one broken thumb and one sliced up pinky finger that was glued back together in the past year. Our stats are down from previous years.

-Mr. Mayer got a vasectomy and handled it like a BOSS! No more babies in this house.

-We adopted a chocolate Labrador named Archer. He's a very happy boy who loves #1, Mr. Mayer, his ball and the swimming pool. He's not really working out to be the great hunting dog Mr. Mayer was hoping for. He doesn't really follow directions, stay with you when outside, or like loud noises. He kinda just does what he wants.

-I stopped taking my anxiety and antidepressants in May. There were a few bumpy weeks, but I think I have evened out and handling life pretty well. Says me :)

-Our sweet old man Beau passed away a few weeks ago while we were on vacation. Although it was expected, I still miss him a lot.

-I decided to spend the months of July and half of August traveling. While incredibly fun, I was worn out. There is something to be said about sleeping in your own bed for more than a night.

I think that brings everyone up to now...
School started yesterday. I tried to control my excitement and not run out of the school building. The little dudes are in Kindergarten this year, will be six next week and started wearing tennis shoes with laces. They think they are very big deals and there is no living with them. #1 is brooding 4th grader this year. She had cheer pictures over the weekend. Me, being the super awesome mom that I am, didn't make her wash her face afterwards. She rocked the first day of school with racoon eyes from her smudged mascara. I'm really killing it at this mom gig lately. 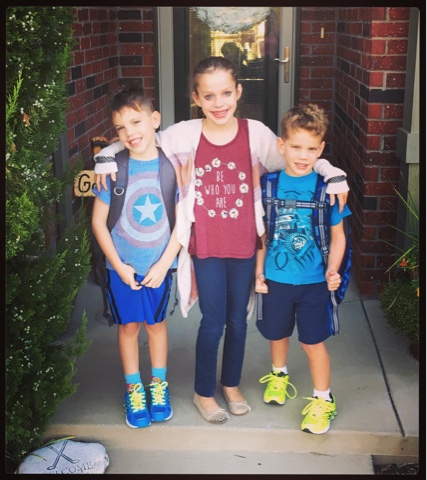