Let's Start This Over

By Jayna Mayer October 25, 2016
By 8:24 this morning I wanted to start my day over. The past 24 hours have been a roller coaster of extreme emotions.

Last night the Dudes came home from karate and I sent them upstairs to shower and get ready for bed. In our upstairs bathroom we have 3 towel hooks for the Dudes to hang their towels on each night. The hooks are a little high for them to reach without a step stool, so I keep a step stool under the hooks for them to use. After #2 got out of his shower we heard him start screaming. Initially Mr. Mayer and I both thought that #2 and #3 were fighting because we could hear #3 yelling. Then we both realized that #2's cry was a little different. Mr. Mayer goes upstairs and before I could blink I hear Mr. Mayer exclaim "OH SHIT!!" Um....that's bad. I run upstairs, with the kitchen towel, because for some reason in my panic I thought a kitchen hand towel was needed. I don't know. Anyway...running upstairs. I get up there and #3 is jumping around in a panic, #2 is stark naked and covered in blood and Mr. Mayer is in front of #2 with a towel going "It's okay, It's okay..." Um....what the hell is happening?! Apparently #2 yanked a towel off of a towel hook, and the towel hook came off with the towel--right into #2's forehead. It was pure carnage upstairs. We calm him down and assess the situation. It's decided that if we can get the blood to stop we can doctor him at home this time. Poor guy is so hard on his forehead. I take him downstairs and doctor him up and clean the blood off of him while Mr. Mayer tries to clean up all the blood upstairs. Amazingly, the blood all came out of the carpet, rugs and clothing. After some snuggles, hugs and kisses it was finally bedtime. 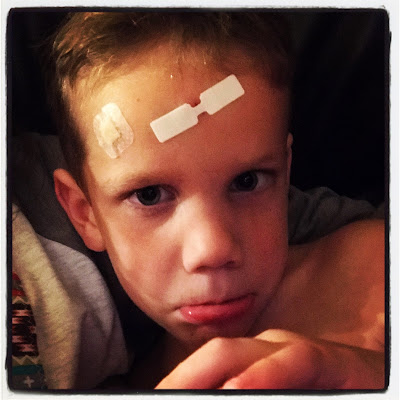 After last nights fun activities I was ready for a normal day today. Mr. Mayer got the kids up and started making them all breakfast while I was getting dressed this morning. Mr. Mayer comes in the room where I am and says "I think #3 just had a seizure." Excuse me, what? Repeat that. Mr. Mayer repeats the scenario. Yup, he totally had a seizure. After the event he seemed okay, although a little lethargic. He wanted to go to school so I took him. I called the doctor's office as soon as they opened. They decided that they didn't need to see him, but referred us to a neurologist for some testing. I consult family members to see if there is a history anywhere of this. I freak the freak out because there is something going on with my baby and naturally play out every worst case scenario in my mind. #3 hadn't been at school two hours when I get a call saying he is the nurse's office crying because his head hurts so bad. Shit. Shit. Shit. I go pick him up and call the doctor's office back. They hadn't wanted to see us because he was behaving fine. Well, now his head hurts and I am not even sure if I can give him Tylenol. The doctor's office decides they want to see him and give us a time to come in. We snuggle, watch movies and hang out until it's time to go. I'm sure he hated all the one on one time. Mr. Mayer meets us at the doctor, because he has been playing out worst case scenarios too. We go in and the Nurse Practitioner takes #3 a series of motion tests to make sure he has normal functioning--he does. She looks in his ears, mouth, eyes, at his belly, arms, legs, feels his head. Everything looks great. She tells us that in these situations it could be just a one time, freak thing, or it could be the start of something else. However--silver lining--if it were a tumor he would have other symptoms--which he does not. That was a relief to hear. We do have to watch #3 closely in case he has another seizure. He can't play outside by himself, can't take baths without one of us in there with him, etc. He's handling everything pretty well. Including his crazy Mommy. Now we just wait for the neurologist to get us in. Today was probably one of the scariest moments of my parenting history. I swear it instantly aged me ten years. 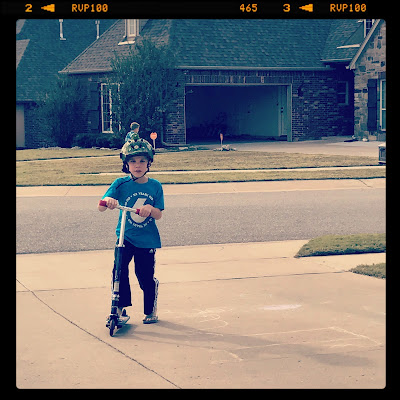