I Let My Son Wear A Dress

By Jayna Mayer November 01, 2016
#3 is a free spirit, to the very core. He is the most loving, kind and creative child you will ever meet. He also likes to wear dresses, play with dolls and wear makeup. I let him. I let my children make choices for themselves and be individuals. As with all my children we have a "no makeup if we are going somewhere, and no makeup to school" rule. This is never a problem. As a parent I let my son wear dresses. I also let my daughter ride a skateboard, I let them go days without showers sometimes, they eat junk food, I vaccinate and medicate, we see a chiropractor, my nine year old probably knows as much about sex as some adults, I sometimes let them ride bikes without their helmets, they can play outside without me, I probably let them have too much screen time, and watch too much TV. My list could go on--I am not a perfect parent. But, do you know what the thing I am questioned about most on that list? I let my son wear dresses. We have had neighbors ask my other two children if their brother is gay. We have had adults stop and tell him that boys don't play with dolls. We have had people stop in our front yard and ask if people treat him differently because he's in a dress. I had a cashier put a doll in sack once, after #3 asked to hold it, because she said she did not think he should play with the doll. I took the doll out of the sack and told her it was his doll and he could play with it. I get a little bristly when it comes to my children. #3 takes most of this in stride. Our family mantra is "boys can do anything girls can do, and girls can do anything boys can do." Mr. Mayer and I are trying to let them be kids, and not raise assholes. We do the best we can. Some days we win, some days we lose.

This year for Halloween #3 chose to be his favorite character-Queen Elsa. He was so excited about his costume. We had a couple of events this past month where he would be able to dress up. As it got closer to time to dress up, he started saying "Well, maybe I will wear something else for this party." When I asked him why he didn't want to wear his Elsa costume he would say "I don't want the other kids to make fun of me." As his mother, that broke my heart to hear. Kids and adults alike can be really cruel. I also understand he is getting older and becoming more aware of social norms. That's my issue. Social norms. There are so many bigger issues in the world, state, this town, than whether a boy wears a dress or not. But, for some reason, because he doesn't do what everyone else does, he gets labeled and ridiculed. It's the grown ups that have to change. Not the child. The day of our first trick or treating and parties arrived. I gave #3 several choices of what to wear, including his Elsa costume. For his Dad's work trick or treating event he decided to wear his Elsa costume. As we were trick or treating around the different cubicles people would ask him if he was Elsa, or tell him how pretty he was. #3, being the no filter guy he is, would look at them and say "I'm a boy. I just like Elsa." He handles this much better than the adults in his life. I am trying to learn from him. Our second event was a bonfire. He didn't want to get his dress stinky, so he chose to wear his favorite bat wings to that. He was just as happy as a bat as he was as Elsa. Last night for trick or treating in the neighborhood he wore his Elsa dress, complete with sparkly makeup. He was a very happy little boy. 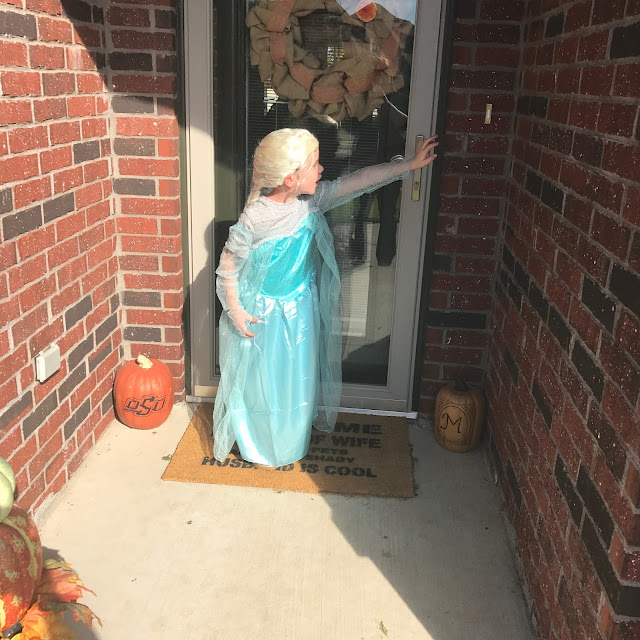