By Jayna Mayer December 11, 2017
Somewhere around my third phone conversation with my insurance company today I hit my wall, hard. I'm not fit for human contact today. I have cried with my dog, I have cried in the lobby of my kids school, through doctors appointments, and in the car. I will probably cry again before I go to bed tonight. My coping mechanisms are crying and chocolate. We are currently out of chocolate.
This weekend was epically bad. #1 and went to a cheer competition in Dallas, Texas for the weekend. We were just there last month, staying in the same hotel. Saturday was day one of the competition and a long day. We left our hotel early and came back around 8:30. We were exhausted and showers and bed were needed. #1 and I were both in bed asleep by 9:30. Around 11:40 a cheer mom calls my cell phone and asks me to come down to the lobby. I get a sweatshirt and pants on and start making my way downstairs before I even thought about it. It was an automatic response. Halfway down I decided to look at my phone and I had a half dozen missed phone calls and text messages and people asking me if I drove a red suburban. W. T. F.?? I get to the lobby and there is a group of people....and a police officer. My adrenaline starts pumping and I vaguely remember answering his questions. He walks me to the parking lot where my suburban is sitting on some cinder blocks. Someone had taken my two passenger wheels. Not just the tire. The entire wheel, and left me with cinder blocks. This isn't happening. This cannot be real life. I did a lot of deep breathing. My brain was not working. I remember people talking. I remember biting my tongue because I didn't want to cry then. The police took a report and said that another vehicle across the street had two wheels taken from them. I never in a 1000 years would have thought someone would steal my wheels. That's stuff you see on TV, not in my real life. A coach drove a Tahoe and had a spare I could use. A couple of the dad's put my spare and her spare on the suburban. The gym owner took my keys and the next morning he had lug nuts put on it and made sure it was safe enough for me to drive. 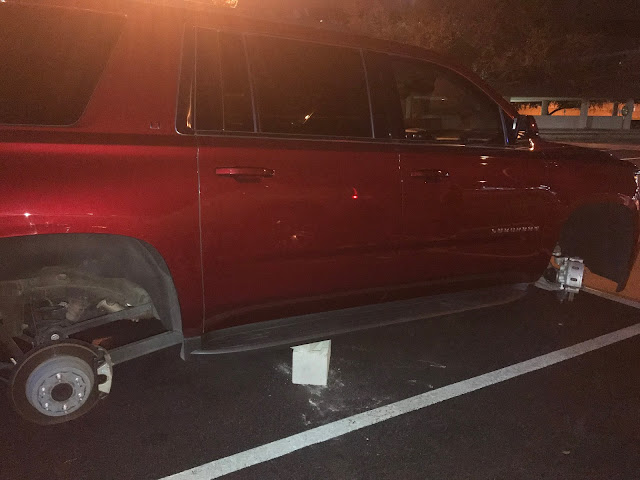 This is #1's first year traveling for cheer. When #1 wanted to do cheer and made a traveling team Mr. Mayer and I decided that only one of us would travel with her. We made this decision for a couple of reasons. Mainly cost. Cheer is expensive and cheer events are expensive. We have a large family and getting all of us into a competition, plus hotel rooms for all six of us would be tough. The second deciding factor is that #2 and #3 are seven year old little boys. Dragging them to a cheer competition would be zero fun for anyone. This seemed like a solid plan, and #1 liked the mom and daughter time. Until this weekend and she begged me to have her Daddy drive to Dallas in the middle of the night because he can make everything better.

I don't know 75% of the other families on the cheer teams. I am starting to recognize faces, but I probably could not tell you who most were. I am a shy person in new situations and around new people. I have generalized anxiety disorder and it's been getting the best of me lately. If I don't know you I generally keep quiet. I was surrounded by cheer parents who I did not know during one of my worst times. These were the nicest people you could ever imagine. I am and will be eternally grateful for them all during this situation. Even into the next day everyone was completely lovely and supportive. I don't have words to describe how comforting it is to know that you are hundreds of miles away from home and there are people who are willing to spend their time helping you in the middle of the night. 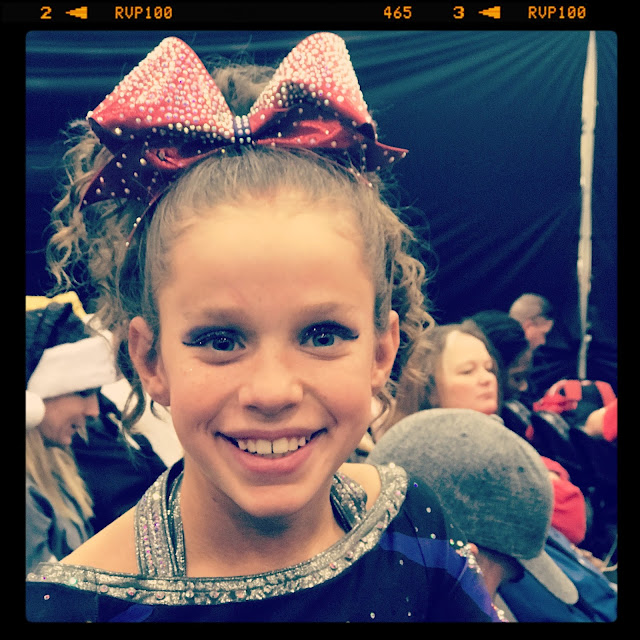 #1 handled all this information the next morning about as well as you can imagine an overly dramatic and worn out preteen would handle all of this. I talked her off of the emotional cliff and we got to the competition. The day was rough and hectic. Towards the end of our day as we were waiting on an awards assembly for one of #1's teams the convention center was evacuated for a bomb threat. This was a first for #1. I had done good to keep her fairly even keeled all day. This evacuation was too much for her. At this point her coaches released her teams to leave for home. This is when something goes right!! No one could get in the parking garages to get their vehicles out. Because the gym owner had my suburban and his wife drove it to the convention center later in the day, the parking garages were full when she got to the convention center. She parked in a parking lot a block or two down from the center. #1 and I walked to the parking lot, hopped in and drove. I didn't stop until we got to Oklahoma. Then I stopped and filled up with gas and hit the road again. Home was a really great place to be last night. Mr. Mayer had a glass of wine waiting on me when I walked through the door. 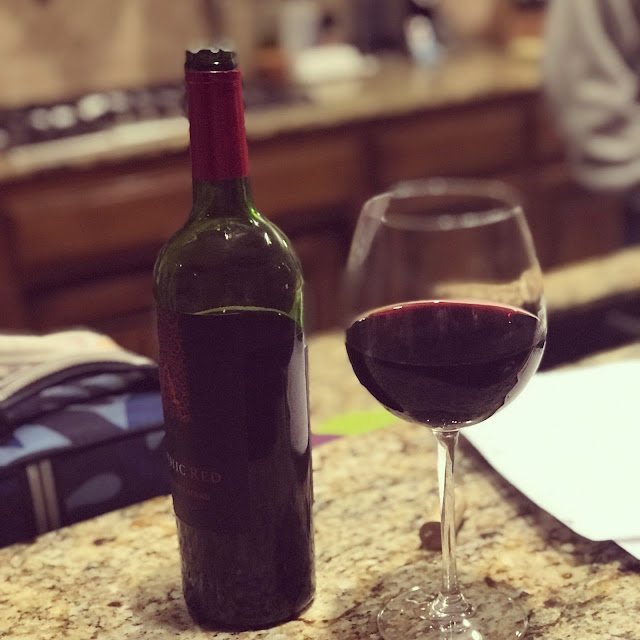 Between two weekends in a row of competitions, #3 having another seizure last week and spending a few hours in the emergency room, moving my mother to a nursing home and being told today that we are going to have to continue to pay an obscene amount of money still, my wheels being stolen, insurance telling me today I have to pay my deductible and I still have to pay for the tires, Christmas, and a bomb threat...I hit my wall. Hard. I didn't cry or meltdown all weekend because I didn't want to upset #1 more than she already was. Today did me in. I had to check #2 and #3 out of school early for #3's doctor appointment today. A friend was in there and said "I saw you had a rough weekend..." and the flood gates opened again. My apologies to everyone in the school lobby for having to see that ugly cry. Hopefully I'm done.

In the grand scheme of things I know it could be much worse than it is. It could have been all four wheels, they could have busted my glass, they could have taken the whole vehicle. The other issues will work themselves out, and a night or two of good sleep will fix a lot of things. The chocolate at my friend's house a little bit ago didn't hurt either ;)