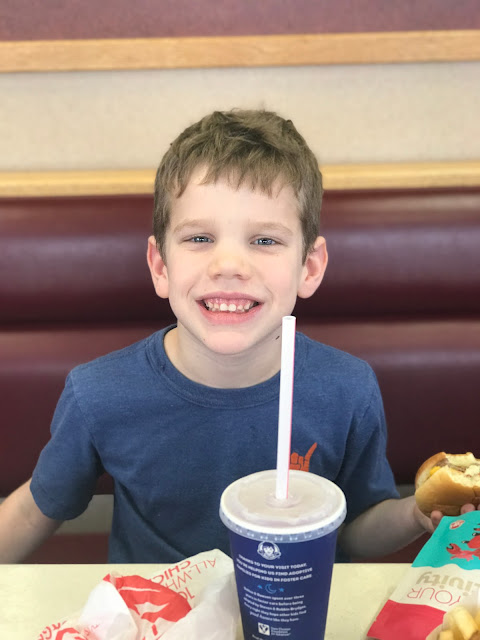 This guy, #2. Out of all my kids this one is the most like me. He's easy going, talkative, happy to be here and a total hot mess. Because he is so chill, and other than the occasional trip to the ER for stitches, he doesn't have many other needs or demands. Lately his brother and sister have been getting all my undivided attention. Between seizures, cheer and the flu my focus has been on them. #2 has just carried on without any complaints. He's rarely sick and was a little miffed that the other two had the flu and got to stay home with me on school days. So, I let him play hooky a couple of weeks ago. Normally I am very strict about them going to school and not missing. But, the other two have got to spend a lot of one on one time with me lately for illnesses, cheer, birthdays and doctors appointments, so I decided that #2 could have a day.
He was so excited when the day arrived. His brother and sister were not nearly as excited as he was! We had no plans other than hanging out together. His only request for the entire day was to have lunch at Wendy's, so that is what we did. The rest of the time we hung out at home and did nothing in particular. He made contraptions with his Lego's and showed me all the ways you could use them. He watched what he wanted to on TV without his brother there to take the remote from him or complain about what shows #2 turned on. When it was time we went and picked his brother and sister up from school and I let him ride in the front seat for the 2 1/2 blocks to the school. Later he told me that it had been the best day ever.
I have been trying to fill the kids with experiences rather than things. Looking back on my childhood I remember the experiences and the things my family did rather than the stuff I was given. I try to take time for each child and do special things with them. We don't always play hooky, sometimes it's as simple as grabbing a drink from Starbucks, or playing a board game. It's hard. Life gets in the way, we get caught up in the daily routines and the busy and that one on one time gets shoved aside. I think that because we are busy and I am out numbered that those one on one times become even more special when we get them. I hope when my kids are grown they can look back and remember the experiences and the fun.