A Very Merry Unbirthday To You!

By Jayna Mayer March 07, 2011
Oh my...those boys are 6 months old. It went really fast. It seems like just yesterday they were this size... 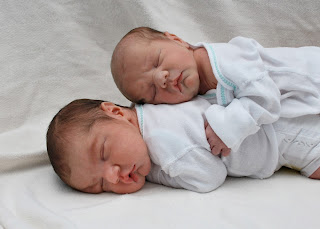 I have to say over all that it's getting a little easier. I don't know if Mr. Hubs and I are just adjusting or it really is getting easier. The boys are happier these days. I am so thankful for that. This past Friday I loaded babies and 2 friends up in the swagger wagon and we took off to OKC for the day to have our hair done. Shrek and Donkey were perfect angels ALL DAY LONG!!! They slept a little in the car on the way up there but otherwise they were up all afternoon and never threw a fit or got upset about anything. It was AMAZING! These boys still take 3 naps a day and to go all afternoon without one is just unheard of.
Today they went for their 6 month check up and shots. I hate that they have to have shots. But, I know that it keeps them healthy. I had Nana Karen go with us this morning. It is much easier to go to the doctor with an extra set of hands. Whew! It made a world of difference. *Thanks Nana Karen!*
Big Boy Shrek weighed in at 19 pounds this morning and 27" long. He is a CHUNK. He is also one of the happiest little boys I have ever seen. He is all smiles and drool....oh my the drool! He is still "that kid" that has to wear the bib 24/7 and still manages to get his shirt soaked. Over the last month big boy has started rolling both directions. HALLELUJAH!  Now if he would start doing that in the middle of the night Mommy and Daddy would be much happier so we wouldn't have to go flip the little pancakes 100 times a night. We are still working on sitting up by ourselves. I know we will get there soon.
Little Donkey weighed in at 16 pounds 7 ounces  and 26" long this morning. He is still tiny compared to his brother. I always tell him he may be small, but he will always be the oldest. Donkey has really gotten chatty over the last month. He has found his voice for sure. He is one of the most laid back babies. Nothing much ruffles his feathers (except when he's tired) and he rarely cries. Donkey has his finger stuck in his mouth all the time. Just one finger stuck in the side of his mouth. It's cute. Donkey isn't rolling over both directions yet, but I'm pretty sure we are days away from that accomplishment. He can sit up on his own better than his brother. Well, really he just leans over on his legs. I'm not sure it could really be called sitting up. Donkey LOVES baby food and eating from a spoon. He yells if I am not fast enough with the good stuff. He and his brother definitely favor the orange foods over the green foods.
I can't believe my babies are 6 months all ready! 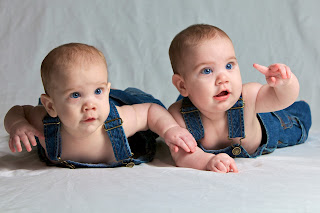 I think the next few months are going to bring lots of milestones and lots of work for Mommy. Both boys are already pulling up on all 4's and rocking. YIKES...it's not going to be long.