It's FRIDAY!! Tomorrow is SATURDAY!!!

By Jayna Mayer April 01, 2011
Happy Friday everyone! I don't know where the time has gone. Wasn't it just Monday?! We've had a busy week around here. Those boys are feeling MUCH better. Thank Goodness! They are much more pleasant to be around when they feel good. And, even better for Mom and Dad is that they have been sleeping all night for the past few nights. I'm convinced it's a trick. My kids don't sleep. They have to be up to something.
I don't know if I had mentioned, but we have a crawler in our house. Yup, Mr. Shrek has been army crawling for almost two weeks now. He thinks he is a VERY. BIG. DEAL. I think I am in VERY. BIG. TROUBLE. 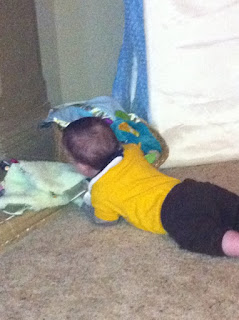 He decided he didn't like the toys I had laid out for him and his brother so he crawled over to the toy basket to get some more.  He's also been obsessed with the play mats lately. I haven't been putting them out for them to play on because Shrek keeps getting himself tangled up in them. See below.... 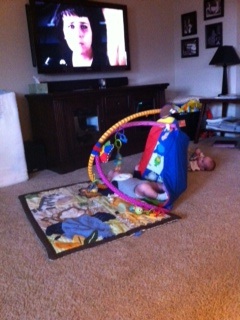 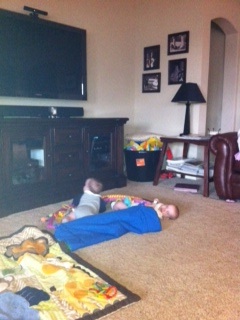 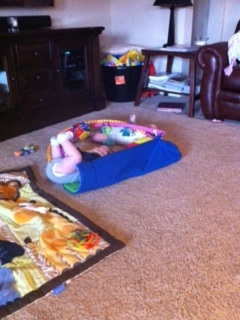 Donkey has no interest in crawling. He doesn't move very much at all. He can roll. I've seen him do it, but he prefers to just lay there. I guess he assumes I will get whatever he wants for him. That turkey. 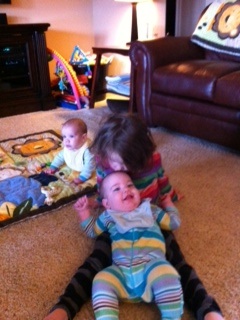 Big Sister Diva has learned to pick the boys up and put them in her lap. This has been very exciting. We still have to remind her to be gentle! and that their heads are attached to their body. No matter how rough she is with her brothers these boys LOVE their sister. They light up every time she is near them. They do not mind her holding them. 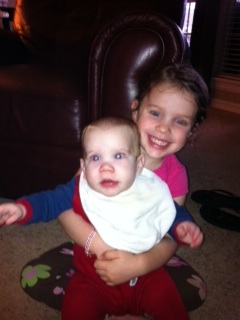 I met some friends I hadn't seen in a while for lunch yesterday.
I left early and stopped by the office where I used to work to see everyone.
Carter and "RoRo" were color coordinated so naturally we had to have a picture :) 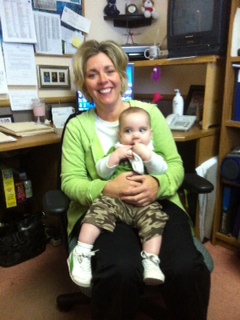 Diva has dance lessons on Wednesday nights. Afterwards Mr. Hubs took her to CherryBerry for a treat. It was very exciting!
He text me to say that she had Bubblegum ice cream with captain crunch, gummy bears, sour worms and pop rocks as her toppings. Ugh, makes my belly hurt. He then said she was going to make mine for me...um, Yay? Thank goodness she didn't!
It's gorgeous outside today. Finally...those gray days were getting me down. I know how seasonal effective disorder feels! The boys and I decided to go to the grocery store (Target) before nap time. It was Shrek's first time sitting in the cart like a big boy! He did not say a single word the entire time we were in the store. Bizarre.... 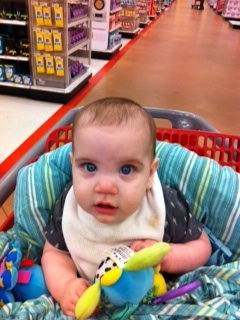 I wore Donkey while we were there because he is 3 pounds lighter. I think that is funny now to say because when they were smaller I always wore Shrek because Donkey was so small. How things change in such a short amount of time! I'm not real sure why I look so serious in the picture. I must have been concentrating! 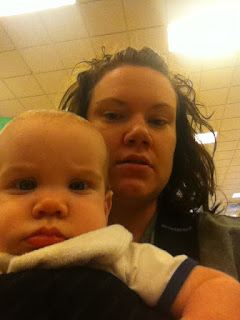 It's been a very busy and FUN week. The weekend is going to be just as busy. Mr. Hubs and I get to go out tomorrow night with a friend and act like real adults. No baby talk or diaper changes for hours!