OnE dAy At A tImE 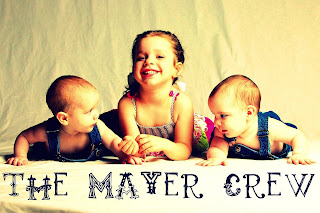 I get asked a lot of questions. I have my standard automatic responses that I give without thinking.
Yes, they are twins.
No, they are not identical.
Yes, I stay very busy.
I even had one woman ask how many minutes apart they were. She didn't know what to say after I said "They are 27 minutes apart." She looked a little shocked and I didn't want to go into the details and the complications that made them 27 minutes apart.
I have often said that I know how easy one baby is. If I had twins first I'm not sure we would have had more. At this point one baby would be a cake walk! On the same hand, lots of people I know who do have twins (or more!) and had the twins first have always said "We don't know any different." I can see that.
I recently went to a baby shower for a friend of mine. During the shower she received lots of lovely things. She was having a girl so there was lots of pink and bows! She received some diapers. One box coming from me. It was a "small" box of diapers. I jokingly told her that the box would last me 4 days. I was only half joking. It really would only last me 4 days. She later said that every time she changes her baby she thinks of me and how many diapers I go through.
On an average I change Shrek and Donkey 5-6 times a day- each. Depending on how full of poo they are that day. That adds up to 10-12 diapers a day and 300-360 diapers a month. One box of diapers from Sam's  doesn't even get me through an entire month. I am lucky however, I only recently had to buy my first box of diapers. When I was pregnant I hoarded diapers. We had diapers stashed all over the baby room, hallway and guest room. I also received a great deal of diapers as baby gifts. A friend turned me onto Amazon Mom. I can order diapers from there at a great discount. I plan to start that very soon.
I may have mentioned before, but I tried to breastfeed Shrek and Donkey. I had breastfed Diva and I was gung-ho to do it with the boys. Diva wasn't easy to breastfeed, but we adjusted and did very well. Shrek and Donkey were power suckers. I had never had pain that bad. It got to the point that I would start crying when I had to feed them. Things were bloody and raw. I consulted with lactation nurses, read on the Internet and tried different techniques. Nothing was helping. In addition to the overwhelming feeling of taking care of two babies and a 3 1/2 year old I was a mess. I felt like all I did was feed babies. I tried pumping but that took up a lot of time I felt like I didn't have. I made it two weeks of breastfeeding and quit. We went to formula. We tried a variety of brands and types of formulas before we found one that everyone seemed happy with.
Over the past month I have gotten the boys down from 5 bottles a day to 4. That doesn't sound like much, but it is!! On 5 bottles a day (they were taking 8oz) a large container of formula from Sam's would last me 4 days. A regular sized container from somewhere like Target would last 3 days. Sam's is about $41 a container and Target is $23.99 a container. It adds up. At 5 bottles a day a large container would last 4 days. A smaller container would last 3 days. Thank goodness for coupons!!!! Now at 4 bottles a day I can stretch it out to 5 or 6 days. That's a big deal!
My dear friend I gave the diapers to recently shared with me that Sam's will take the formula coupons that look like checks. This.was.the.best.news.ever. I was a little hesitant but had to go buy formula. I have a group of friends that keeps me stocked with formula coupons, most of them the check kind. Mr. Mayer and I took the clan to Sam's on Sunday to get some baby supplies. I bought 6 containers of formula and was able to use all 6 of the coupons I had. It was a $20 savings. I tried not to do cartwheels as I left the store.
The boys are now eating baby food too. They have really taken to baby food. I make my own baby food for the most part. I wrote a lot of companies after I had Shrek and Donkey and received a ton of coupons for baby food and diapers. I have used the coupons to buy some "breakfast" foods and meats. I refuse to puree meat. It grosses me out. I have a website I use, wholesomebabyfood.com and a couple of baby food cookbooks that I refer to and as usual make up my own stuff. It's gone pretty well. Now those chunky monkeys are eating a container of "breakfast." It's stuff like pears, oatmeal and cinnamon and other fruit and grain mixes. At lunch they eat "two cubes" (ice cube size) of vegetable and will eat two cubes of a fruit if I give it to them. I don't always. Then in the evening they are eating two cubes of vegetable, two cubes of fruit and a small jar of meat on most nights. They don't always get meat. Needless to say it's a lot of food!

In addition to all the necessities I have discussed- diapers, formula, food, etc. there is the issue of clothing two babies! When I was pregnant a friend gave me her son's entire first 18 months wardrobe. I felt like I had hit the jackpot. I haven't really had to get the boys any clothes until recently. It's worked out that Shrek is a size larger than Donkey. So, Donkey is getting hand me downs! But, it works out so that I haven't had to have double the clothes. I get a little slack because I rarely dress the boys alike. I figure they are two individual people who happen to share a birthday they don't need to dress alike. I still do for special occasion's and what nots. I have always bargained shopped for Diva (garage sales, thrift stores, Target and department store clearances). Nana Karen has been tremendous in this effort. I plan on clothing Shrek and Donkey in the same manner. Kids are tough on clothes and I don't feel the need to pay a lot of money for a shirt that they will are going to play and be kids in. I don't feel so bad if I can't get a stain out of something.
In an average week I do 16 loads of laundry, 3 loads of dishes a day (21 loads a week) and I have actually managed to make dinner most nights. Cooking is something I have always loved to do. Reading cookbooks is a guilty pleasure of mine. We have far less nights of "I don't feel like cooking" since I have stayed home than when I was working.
Life has certainly stayed busy with twins. I have been busier since I quit my job than I was when I had it I think. It's a change I am happy with however. I really love being here for the day to day stuff.