By Jayna Mayer October 22, 2011
It's been Fall Break around here. This is Diva's first "official" fall break. She's always gone to daycare. I had big plans of how Fall Break was going to go. Like usual those big plans didn't work out so great. Wednesday was Diva's last day at school. She had Thursday and Friday off. I was expecting my in laws to come late Wednesday night. Thursday was supposed be really great weather so I thought that maybe we could go to the zoo. I hadn't planned on Friday yet. Saturday was a TMOM's family picnic that we were going to and then maybe out to Oktoberfest. Pretty easy pace, nothing fancy.
Well....let me tell you. That is not what happened. The in laws didn't come on Wednesday. Wednesday night Mr. Mayer started making a batch of Pumpkin Ale beer. Things were going well. I was watching some TV. All of a sudden Mr. Mayer starts going "Oh shit no! Oh shit no! Oh shit no!" He then said he needed a towel. Wait, he needed several towels. I immediately thought something had happened to the beer. I grab towels. Walk over to the kitchen and see this... 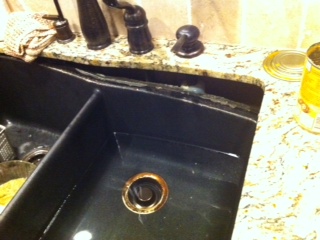 My sink fell. Great. This is bad. We spend the next hour trying to sit the sink up on some type of support. The beer was OK~ thank goodness!
The next morning the kids and I hang out around the house. We go and meet Aunt Bets for lunch. During lunch Mr. Mayer calls and says that he had called the builder to tell them about our sink. They directed him to call the company that installed the sink so he did. He explained what had happened and that the seal broke. The woman arranged for her husband (the owner) to come out in a 1 1/2 hours and fix the sink. No cost! No headache to Mr. Mayer and I. What. a. relief. I met him at the house and he fixed the sink in under 30 minutes. Despite my children's best efforts to slow him down.
Later that evening my sister/aunt (honestly, I'll explain some day) and two of her kids (ages 8 and 18) came for the weekend. We went to dinner at Osaka....the kids LOVED it! As always. The next day Mr. Mayer got up and went to work and the rest of us headed to the mall. The night before Shrek did not sleep well at all. Diva and her cousin FM stayed up WWWWAAAAAYYYY to late. I was having some reservations about taking the kids out to shop. We make it to the mall around 10am. We shop until we drop. Around 4:30 Diva asked Aunt Kathy if we could go home because she was tired and wanted to go to bed. THAT NEVER HAPPENS! She was a tired kid.
We had a little fun before that... 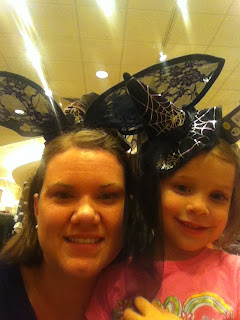 And, to the dudes credit. They did not sleep all day long. They sat in their stroller and did not throw a single fit the entire day. It was weird. They were happy as could be in that stroller all day. Now, taking a double stroller into any store in the mall. Next to impossible. They are not equipped for me. That was a huge headache.
We make it home and the in laws had made it in from New Mexico. They stayed and played with the kids for a while before heading on to their house. We ate some dinner and that the three "big" girls met some other people and saw "Footloose." Wow! What a good movie!
Today we went to Whole Foods, watched OSU go to victory and then headed to the TMOM's picnic. We were late to the picnic because the dudes were napping. We arrived and all 3 of them went full throttle for a few hours. Then Diva fell and conked her head (naturally when Mr. Mayer and I were both chasing babies and couldn't see her which totally freaked her out...crappy parent move #11109008890985982). It was downhill from there. They had hit their wall. We load up and come home. Get everyone bathed and in bed. We had planned to go to Oktoberfest and meet some friends. However~ it started storming as we are getting Diva in bed. We call our babysitter and say "never mind." Neither one of us wanted to get out in that kind of weather. Besides in the whirlwind of the past few days we are like the walking dead around here.
I'm planning on a much calmer, quieter day tomorrow. Diva and I are going to a friends house to decorate pumpkins tomorrow afternoon. Otherwise we have no plans. I am planning on being very l-a-z-y.
Oh! Bonus! My birthday is in a few weeks and Mr. Mayer has been planning a surprise trip for it. I haven't known where we were going. This afternoon while we were talking about upcoming expenses he goes "We are doing great even with our trip to Vegas." There are no words to describe what his face looked like. It was priceless. And, now I know where I will be spending my birthday. I still don't know where we are staying in Vegas. This will be my very first trip there~ever! So.very.excited.