I Love You, But I Don't Really Like You Right Now.

By Jayna Mayer December 24, 2011
My mom used to say "I love you, but I don't really like you" to me all the time. It stuck with me. I kind of get that statement now.
Ugh...I debated about writing this it being Christmas Eve and all. But OHMYGOSH!!! The Diva has been out of school since Wednesday. She doesn't go back to school until JANUARY 3RD!!!!!
She is a good kid. She is strong willed. She is stubborn. She is creative. She is sensitive. She is dramatic. She is a complete joy. She is majorly excited about Christmas.
In addition to her excitement I have been letting her stay up late since she hasn't had school. If there is one thing about this child that has never changed. She has to have her sleep. She is a bear if she doesn't have it. I should learn.
Yesterday was trying. She wasn't listening. She was back talking and I was having to remind her a lot that her brother's were babies and she could hurt them. Today. Today was no better. She was in rare form. The high point was when I took her to get her fingernails and toe nails painted at a salon. Special treat right? It all started out well enough. Aunt Bets had found a new salon to try. They had special chairs for kids to sit in while they were pampered. It was a very big deal. I was getting my nails and toes done as well. Of course the Diva finished before me. There was a little boy there and she started playing with him. As I was finishing up I told her to get her shoes and socks on because we needed to go. She started yelling and throwing a fit in the middle of the salon because she didn't want to leave. I tried to keep my composure. I calmly told her I would be happy to leave her there. She didn't like that. She put her shoes and socks on and grabbed her coat. She then asked me for my cell phone so she could play games on it in the car. I told her no. She then proceed to STOMP HER FOOT and yell at me and ask WHY?! Really? This child just asked why and she is behaving like that. I told her it was because she was yelling at me and it was time to go. On the way home she didn't say a word. I made her go upstairs for "quiet time" when we got home. The rest of the evening has gone about the same. Her yelling, not listening and throwing fits. Mr. Mayer and I finally threatened her with Santa not coming to the house to get her to take a shower and pick up some toys. *Sigh* She is sleeping now. I made her go to bed a little early. Mean? Maybe. But, this Mama is worn out and tomorrow is going to be a very big day. However, after she goes to bed she normally comes downstairs once or twice for additional hugs and kisses and we can hear her playing around upstairs. We haven't heard a peep from her tonight. I'm sure she as was asleep as soon as she got still tonight. 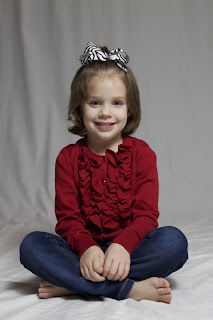