By Jayna Mayer January 06, 2012
So. I thought I would try to be a good Mommy today and take the herd to the park. Alone. The weather was fantastic. I texted my friend Megan and we arranged to meet at a local park with all our kids. I say that like we have a ton. She has 2 (ages 4 and 9mo) and then there are my 3. The Diva has some serious love for Megan's little boy. She was so excited to get to go to the park. Shrek and Donkey were just excited to go anywhere.
I arrive at the park and the entire county had the same idea as me about going to the park. It took forever to find a parking spot. Diva's non stop chatter and questions in addition to the the horrible parking situation and my lack of parking skills and not being able to find a spot equalled me being a hot flustered mess by the time I wedged the swagger wagon in a little bitty spot.
I spend my customary 10 minutes unloading everyone and getting the Dudes in their stroller and we be-bop over to the play area. Megan was there waiting on us and her mom to drop her kids off.
This is where it gets funny. I apparently had a concussion at some point and thought that the Dudes would be able to play and run together or at least in the same vicinity. WHUCK?! I really was drinking the crazy juice today. I let the Dudes free from their constraints and they immediately go as fast as their chubby little legs would take them IN OPPOSITE DIRECTIONS. Megan and I both started chasing kids. Thank God Diva could play in one spot for a minute. We proceed to chase babies for the next 10 minutes. The Dudes were still going full blast in opposite directions. Ugh...this is not going well. Megan's mom arrives and she goes to get her kids. I dumbly try to chase both boys alone as they go their separate ways. This really is not going well. I am worn out already. Diva is demanding that I watch her slide down the slide and I think Carter is about to run into the river and Owen is trying to cross Riverside. Crap! I grab both Dudes up and  strap them into their stroller. They were screaming before I even got them in the stroller. So now the entire park is staring at me. Yes. I tried and I failed. There. I admit it. I walk the boys around a little and cave and give them some pacifiers and they calm down about 20 minutes later. Diva and Myles are happily playing and running around like goons. I tried to get some pictures. Myles was not having any of it. All I could get was him hiding behind his mom's leg. 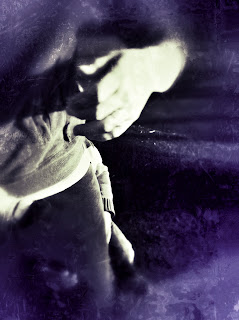 Of course you knew the Diva would pose for a picture. 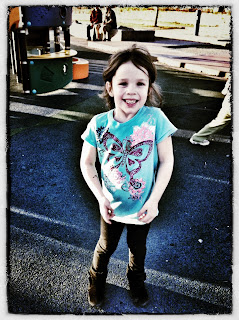 And then Myles was looking right at me and I tried to get a picture of his beautiful face. This is what I got. 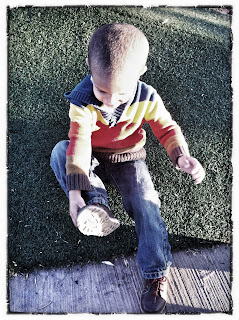 That stinker.
While the big kids were running around and Megan and I were chit chatting a group of kids arrived. They looked like they were in the age range of 10-12. Maybe. There was one girl. She looked closer to 10 than 12. Her shirt read as follows "I'm In Love With A Gangsta." I'm sorry. Let me get on a soapbox for a second. First~a company somewhere in the world thought that was appropriate to put on a child's shirt. Second~ Someone thought that was appropriate for their child to wear.
I know I should not be surprised. But, I mean. That's the problem people.
Then! Then as we stay there a little bit longer and let the kids play, the same Gangsta girl is playing on a toy right next to Megan and I and her friend falls off. The next thing I hear coming out of Gangsta girl is "OH SHIT." I think they could have heard her in the next county. I guess I am getting old. I'm out dated. I'm a fuddy duddy. Weird. Lame. Whatever. I'm not okay with so much of what was going on with this child.
By this point the sun was setting and it was cooling off. I load all the kids up and head home. I was pretty sure the Dudes would fall asleep in the car on the way home and completely screw up bedtime since it was getting close. They surprised me. The didn't sleep on the way home. We got home and I fed them and put them in their PJ's. They then played happily until bedtime and did not make a peep when they went to bed. Carter didn't even talk to himself for an hour and a half like normal. It was a little strange.
Diva, Mr. Mayer and I had a late dinner. I made fried rice with shrimp. Never made it before. Everyone had a second helping. It was so yummy. I found it on Twice the Love...Half the Sleep earlier today.