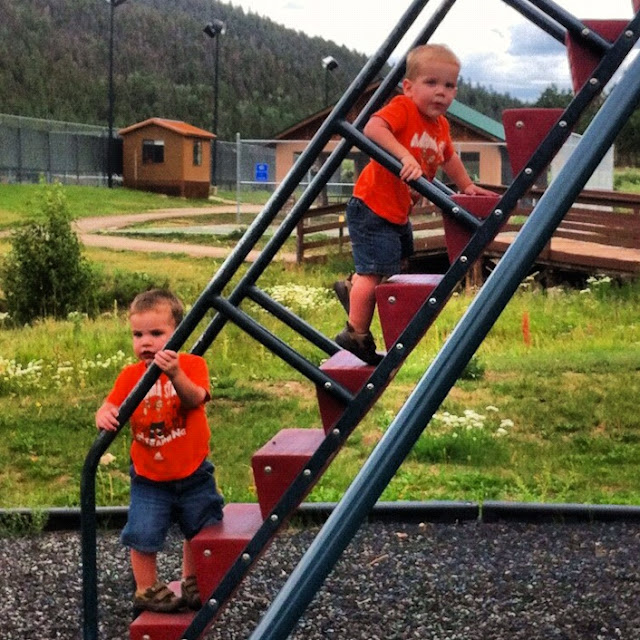 Ugh...remember a week or so ago I posted about my little escape artist? Then we immediately left for vacation and Carter immediately started climbing out of his pack & play. That was completely awesome (dripping with sarcasm). We came home on Saturday night. Sunday afternoon Mr. Mayer took the sides off of the Dudes cribs and turned them into toddler beds. My babies aren't babies anymore. That hurts a little.
I took most everything out of their rooms. Child locks were put on the changing table/dresser. I bought them new sheets since most of their old ones had holes and the elastic was shot. I got them little blankets for their beds and little pillows. I was not ready for this new stage.
Bedtime came. I had convinced myself that it was going to be hours and hours of torture and that they would never sleep.
Mr. Mayer and I put them in bed and tell them "night night." Then we turned out the light and walked out. Carter immediately started wailing a shrill paint peeling noise. It sounded like his limbs were being torn off. He was in pain. He was dying a slow painful death. You get the idea. This carried on for....30 minutes. Then....silence. Yup. 30 minutes. I was prepared for an all nighter and he gave me 30 minutes.  I held my breathe. Drank some wine and waited. Nothing. Never another peep. Mr. Mayer peeked in and saw Owen sleeping soundly on his pillow. Carter was turned sideways, wrapped up in a blanket and feet propped up on the wall. Sound asleep. They stayed asleep until this morning. It was a little weird to have 2 little boys greet me at the door when I opened it this morning to get them up.
First night went much better than I ever imagined. I was dreading nap time today. Not only have we gone to big boy beds, but I am putting them back on their sister's school schedule which means a new nap time. Great.
I laid them down in their beds. Walked out and shut the door (thank goodness they can't open their door yet!!). Then....nothing. There was about 30 minutes I didn't hear a peep from their room. Then I heard Owen start talking. He jabbered for over an hour. I'm not entirely sure he ever slept. But, there was no crying. WHAT IS GOING ON?!
Tonight I was sure would be a battle. The Dudes had been cranky all day. We played outside, did dinner, snow cones, baths and.....bed. Mr. Mayer and I laid them down. Told them "night night" and walked out of the room. They didn't make a peep. I peeked in on them about 15 minutes later to make sure they were okay. Both little Dudes were sound asleep in their beds. Awwww......
Now, I'm sure that by blogging this I am jinxing myself. But, tonight the house is peaceful and I have two little boys who are turning into Big Boys at warp speed. Before you know it they will be off to Kindergarten like their sister is next week...sniff sniff. 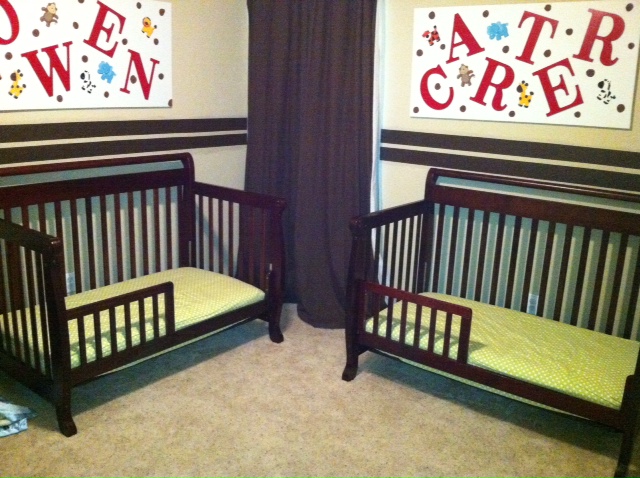