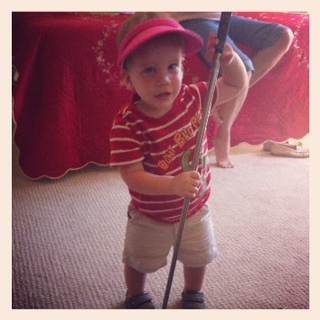 My sweet little Owen has turned into a big ol' meanie. I know. Look at that sweet little face. He couldn't possibly be mean. I was in denial. But, over the past couple of weeks it's becoming a problem. At first I thought he was just having a bad day. It started with pushing and taking toys. This week a friend came over with her little girl who is 19 months. Little Addie would be playing with a toy and Owen would come up and take the toy then hit her with it. It wasn't a one time thing. He did it repeatedly. When he wasn't hitting her he was pushing her, pulling her hair or throwing things at her. Where is this coming from?
Today their little friends Alec and Aiden came over to play. Owen was up to his old tricks. He was hitting, pushing, pulling, taking toys, throwing toys. Not only to Alec and Aiden, but to his brother.
I'm distressed. I  know some of it is age. But, I don't want to just allow him to be mean. I have tried to do time outs. I'm not sure they work. Sometimes after he does something mean he puts himself in time out. I get down on his level and tell him we don't hit, kick, push, throw, etc. I try smacking a hand, removing the toy. As I type this I realize I should probably try to be consistent. Sheesh....I'm all over the place on this.
I'm not sure where this new aggressive Owen has come from. His brother has always kind of pushed him around. Mr. Mayer and I would laugh and say "One of these days Owen will get tired of it and stand up for himself." This is not what I had in mind. Typically he is not mean to his brother. He is mean to everyone else but Carter. Carter still bullies Owen to an extent. I'm at a loss. If anyone has any ideas, what worked for them, whatever I am open to it. I have heard of terrible 2's, but never really went through that with Olivia. Things got rough with her when she turned 3, but she was never aggressive and mean. Is this terrible 2's? I don't want to raise that kid that no one wants around. Or that terrorizes the neighborhood al la Dennis the Menace. Yikes!!
In other news, the Dudes are climbing all over everything. They are taking things off the walls people! They destroyed 3 pictures that were hanging on the wall in their room. I mean, seriously. I was doing dishes this morning and look up to see them on the entertainment center. I have an open floor plan. We were all within 10 feet of each other. I did what any good parent does and took a couple of pictures, then made them get down. 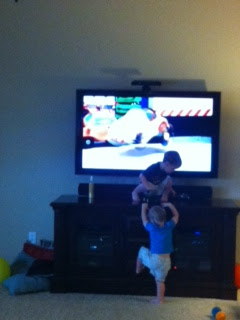 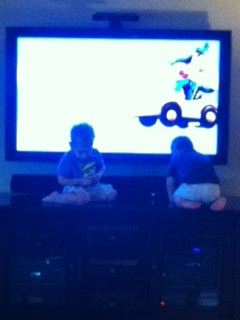