By Jayna Mayer March 18, 2014
Ugh...I finally feel like I am getting adjusted to the time change. I LOVE Daylight Savings Time. I HATE the adjustment period. I hate it even more now that I have kids. I was out of town with the kids during the time change. Not only were we out of our routine but the time was screwing with us too. I think it was noon that Sunday before we managed to get out of our pajamas. That's really not so bad. The really bad part happened two days later. I get up at 4:45am on Monday, Wednesday and Friday to go to the gym. I get to "sleep in" on Tuesday and Thursdays. Unfortunately #1 and Mr. Mayer have to be out the door at 7:35 every morning to get to school and work on time. So there really isn't any sleeping in. So Monday after the time change I was up and at the gym at the normal time. Tuesday I wake up to Mr. Mayer saying "OH SHIT!!! It's 7:20!!" Well. crap. I was sleeping good too. So I spring up out of bed and run upstairs to wake the girl up. I burst into her room and start rubbing her back.
Me: Hey. So. We overslept and are running super late. You are going to be late. It's happening. You need to get up and get dressed super fast.
Her: So. I'm not going to get breakfast.
Me: I'll give you a granola bar or something to eat on the way.
Her: Ahhh...why did you over sleep?
Me: Just come on before your Dad gets cranky.
Her: Fine
So, the morning was off to a great start. I run back downstairs and throw a snack in her backpack and sign her daily report. She stumbles downstairs and I throw a granola bar at her. There are some quick hugs and kisses and her and Mr. Mayer are out the door. On time. I don't know how we did it but she was at school on time. Of course I worried about her the rest of the day. Did she get enough to eat? Was she hungry? Was she cranky? Was she having a bad day? Getting into trouble because she was so rushed this morning? I had all kinds of things going through my head.
I was glad Mr. Mayer and #1 were on time that morning. However, it was a school day for the Dudes too. I had some appointments while they were at school. It was a busy day and I spent the entire day perpetually 10 minutes late to everything. I was even late picking up #1 from school that day. I couldn't catch a break. I hate that feeling. It was a very frustrating day. Good news is we recovered and seem to have adjusted to the new time. The one perk to the time change is my kids are all sleeping a little later right now. I'm not upset about that at all. 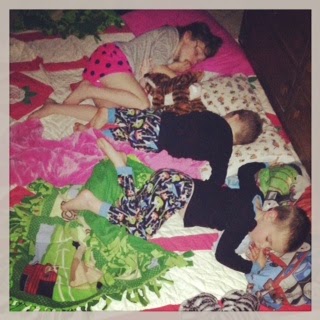