By Jayna Mayer October 29, 2014
Hello friends!! I'm happy to report since my last blog I am feeling MUCH better. More and more like my old self every day. It's great.
This past weekend Mr. Mayer and I traveled to Virginia to check something off of his bucket list he has been working very hard for. Thanks to our "Kewah" we were able to go kid free. The journey actually began last New Year's Eve when Mr. Mayer's cousin, Ryan, convinced  (I'm pretty sure whiskey was involved in the persuasion as well) him to run a marathon. Not just any marathon-the Marine Corp. Memorial Marathon. It's the 3rd largest marathon and participants are picked on a lottery basis. Mr. Mayer signed up thinking that his chances of being chosen were slim. However, in early spring Ryan text and said he had been chosen for the marathon. Mr. Mayer hadn't been notified so he thought he didn't get picked. Well, later in the day he got the text saying he was picked. Let the training begin!! Ryan created a training plan for he and Mr. Mayer. Mr. Mayer began running, and running, and running. I joked I became a running widow. Hahaha....you guys know it's true. Mr. Mayer kinda slacked off the past month or so. Life happens and running takes a lot of time. The date for the marathon drew closer and closer. Mr. Mayer became more and more nervous. By last week he was hardly sleeping he was so nervous. We flew to Virginia on Friday and stayed with our cousins Ryan and Elizabeth. They have two of the cutest kids ever. One being a new baby I was dying to go squish. And Miss Emily is very squishy. I. Hated. Every. Minute. JK! Friday night we celebrated grown up style with dinner and drinks. Saturday we all went into DC. Mr. Mayer and Ryan went and picked up their packets and gear. Elizabeth and I went to the Eastern Market. Now- I have had a long love affair with the east coast. I have often said if it weren't for the traffic I would move east in an instant. Spending the day in DC and going to Eastern Market did nothing to diminish my love for that part of the country. And fall time in the east is absolutely breathtaking. Later in the day we went back and hung out in the backyard enjoying the sunshine and perfect weather. It was so rough. Especially since I was told it was 90 in Oklahoma. The next morning we were up at 4am to begin the fun. Ugh that was early. Mr. Mayer was beyond nervous. He and Ryan left around 5. Elizabeth and I planned to leave around 7:30. This was my first time going to a marathon and let me just say that spectating is an event in itself. Elizabeth and I covered over 7 miles just trying to catch the guys at different mile markers. We started at mile 5 1/2. We missed Ryan but were able to see Mr. Mayer run by. He was looking good. Next we raced over to mile 10 in hopes to catch Ryan. The problem is Ryan runs a 7.23 minute mile. Needless to say we missed him there too. After that we ran back to the Metro and went to miles 18 and 19. There we were able to see both the guys. At mile 18 Ryan was looking great and still smiling. By mile 19 he was looking a little worse for wear. At mile 18 Mr. Mayer was looking pretty good. He said he had fallen apart a few miles back but felt like he had collected himself. We gave him some Gatorade and a banana at mile 19 and sent him on his way. Then we raced to the finish line. Hole. E. Balls. That was overwhelming. There were over 30,000 marathon participants and probably 3x that many spectators-all at the finish line. The finish line was at the top of a steep hill at Arlington Cemetery (Marathon began at the Pentagon). The runners belongings were in UPS trucks at the bottom of the hill around a corner. Ryan being a super fast human finished in a little over 3 hours. We met him and went to collect Mr. Mayer's belongings. We may or may not have told the people at Mr. Mayer's UPS truck he was in the medical tent so we could get his stuff for him. I plead the 5th. Then Elizabeth and I hiked up the hill to the finish line to see Mr. Mayer run across. Problem is (and I totally understand the safety reasons for this, but still irritated) they had a huge chain link fence blocking spectators from the finish line. So I had to stand some distance away and watch as Mr. Mayer ran across. I was so proud. This is a goal he has had for a long time. I know he's proud of his accomplishment as well. You could visibly see the relief in his face as he finished his race. His official finish time was 5:49:30. It was not the time he wanted (he wanted 5 or under), but I have to remind him that's still a HUGE accomplishment. Mr. Mayer is already saying "in my next marathon." I suspect there will be a few more in his future.
I had no idea what to expect when Elizabeth and I left Sunday morning. I was prepared for a lot of waiting around. I had no idea how much fun watching and cheering would be. The people watching alone was fantastic. Add in the patriotism of the event and it was a fun day. There were Marines at all the aid stations and cheering the runners on. There were Air Force and Coast Guard planes and helicopters flying around. All in the Nation's Capitol. 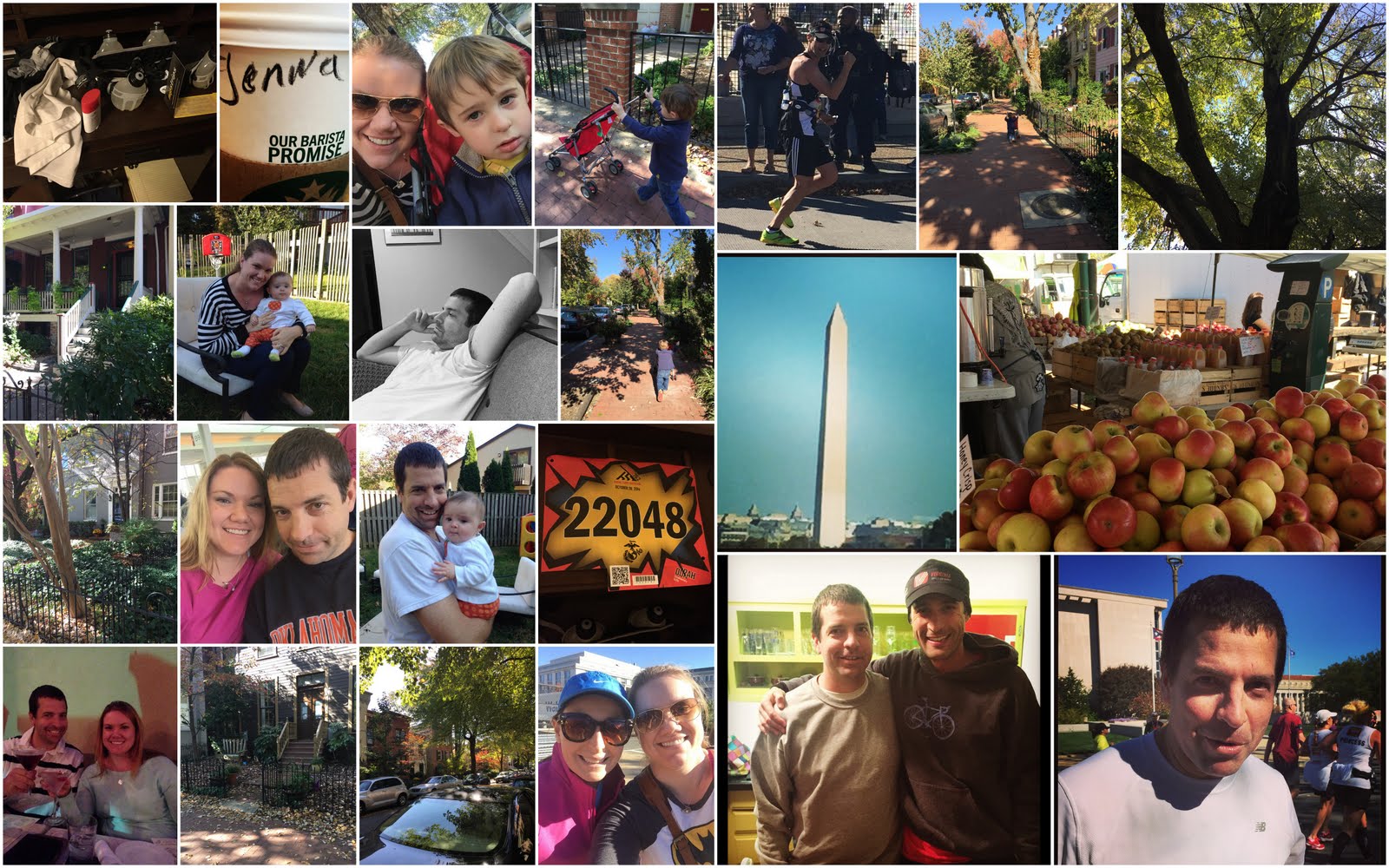