By Jayna Mayer February 02, 2015
Hey y'all! I had my wisdom teeth and some extras taken out last week. I'm finally starting to feel like myself today. 6 days later! I won't lie- I was terrified about having my teeth pulled. I had actually put my wisdom teeth off successfully for 14 years. My dentist was appalled I kept refusing. They stayed swollen and sore 90% of the time. Over time it was just something I had gotten used to and took ibuprofen when the pain was really bad. No biggie. I planned to have my wisdom teeth with me until death. My main fear? Dry sockets. Dumb, I know, but I was paralyzed with fear of dry sockets. Mainly because I don't like pain and those that I have seen with dry sockets make it seem absolutely horrible. I had a friend (hey Jess!) have her wisdom teeth taken out years ago. She got dry sockets. Then she came back to work a few days later and looked like she had been in the losing end of a prize fight. Nope. No way. Not having it. I'll deal.
Fast forward to two weeks ago. I went to my much delayed dentist appointment. I try to play it cool for my kids, but truth of the matter is- I hate going to the dentist.
My background on the subject is awful. I had rotten teeth when I was small. When my parents adopted me they took and had all my teeth pulled and I had to wear dentures. The gas made me sick. My mouth hurt. And, I had dentures. At the time I was in Kindergarten. If you were good in class your reward was choosing a piece of candy out of the treasure jar. My favorite candy was Starburst. I chose it every time. My teeth fell out every time. Kids are cruel. It was embarrassing. I just wanted to be normal. Finally middle of 1st grade I got to stop wearing my dentures because my other teeth were growing in and all the other kids were losing teeth so I looked like everyone else. Over the years I had a series of awful dentists, gas still made me sick and in middle school I had to wear a spacer retainer. Ever had one? It's similar to a medieval torture device. It was some of the worst pain I ever had. After 2 years of that I had some more teeth pulled. Then I had a yellow tooth in the front of my mouth I was super self conscious of. I had a veneer put on. It fell off then I had a crown put on later. That crown wasn't done properly and let to years of abscesses and root canals until my current dentist finally figured it out and fixed the problem. An abscessed tooth is no joke. And the size my head swelled to is no joke. I could terrify small children. In the meantime I have two baby teeth that I never lost and have no teeth to replace them with. I planned to keep those until death as well. A few years ago one got a cavity. It was downhill from there. We crowned it. Did a root canal on it. Everything possible. Then it got loose. Two weeks ago the dentist said there was nothing more we can do for it. It had to be pulled. I had a cavity in one of my wisdom teeth also and it had to be pulled. I cried like a baby. I didn't want another hole in my mouth.
He referred me to an oral surgeon. I called that day to make my appointment thinking they would schedule me several months out. Plenty of time to mentally prepare. Nope. They scheduled me for the following week. Yikes!! Plenty of time to completely freak myself out. Mr. Mayer took half the week off to help me. This was the first time I was ever put completely under anesthesia. I was prepared for the worst. However- I've been pleasantly surprised. The surgeon was great. I have had very minimal discomfort. My jaws have been the worst which is something completely surprising to me. Is that normal? I used my oils (Mr. Mayer thinks I'm crazy) to rinse my mouth and rub on my jaws and lymph nodes. I haven't had much swelling or bruising. I stopped taking the prescribed pain meds after the first day. They made me feel really awful and weird. I would be a terrible drug addict. Just sayin'. Motrin works just fine. I was the best patient. Other than the limited talking thing. That's hard to do. The most frustrating thing is not being able to eat anything. It's been a good weight loss program though. I'm starving and can't eat anything except super soft food and liquids. I did manage some eggs this morning. Thanks to Mr. Mayer and Akelah I was able to lay on the couch and let my body heal. The kids were great too and knew Mommy had owies and to let her rest. I've had no dry sockets, minimal pain or side effects. I go in 6 weeks to have a consult for an implant. Don't worry. I am gearing up to totally freak myself out on that. Good news though is they said I had enough bone and would not have to have a bone graft like originally thought. Whew! 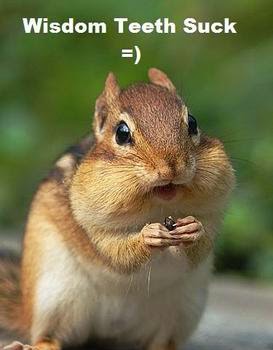