By Jayna Mayer July 05, 2017
I am a professional at over scheduling and doing too much. I have really been working on this and trying to simplify my life a little. I have been focusing on meaningful relationships and moments, and taking more of a quality over quantity approach to life lately. It has been hard, but has been so worth it. Summer has been a perfect test to my efforts. Last summer I worked and when I wasn't working I had a "fun activity" scheduled. We were so scheduled and busy that we lost the "fun" part somewhere along the way. Mr. Mayer and I took a long weekend together last summer and I was so tired from our "easy summer" that I just wanted to sleep the whole time. That's not fun.

This summer we have played with our neighbors and cousins, swam and slept in. The kids get to pick two camps they can do. The boys had one in June and another one in July. #1 didn't want to do any camps other than her cheer camps she has to do, and I am not making her. We have had time to watch movies, have sleepovers and catch fireflies. I have learned that it is just as fun to stay home and play pretend with the neighbors as it is to drive and hour to see a museum.

It has also been fun to watch the kids form relationships. We are lucky enough to live in a neighborhood with a lot of kids around the same ages as mine. These kids play until sunset all day everyday. Growing up my best friend stayed at her grandmother's across the street a lot of the time. Her and I, along with several other neighborhood kids, would play all day long. Those are some of my favorite memories, and some of my life long friendships were formed then. I am so happy that my kids get to have some of the same experiences and that they are forming lifelong relationships. #2 has already gotten married twice this summer!! The biggest takeaway I have from this summer so far is how fun the ordinary things can be. The kids love playing and riding their bikes outside. They love movie nights in the living room. Going to get a popsicle for snack time is a really big deal. Today we rode our bikes 1/2 a mile to get lunch, and I have never seen three kids as excited about something. 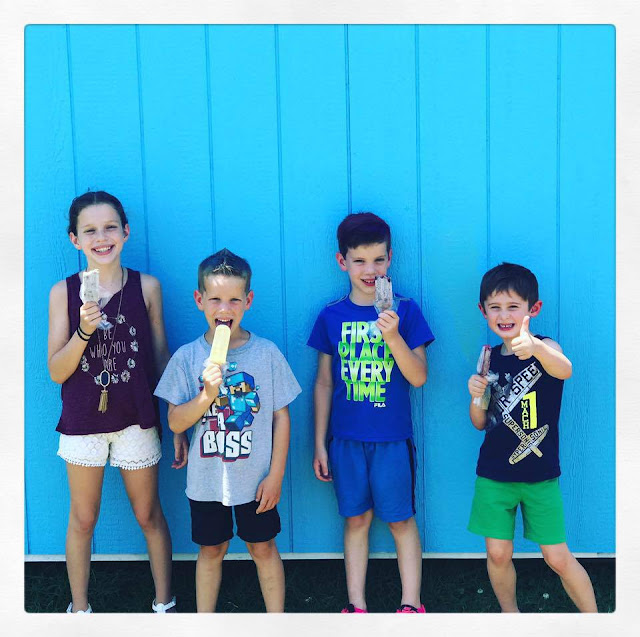 In addition to trying not to make too many plans, I am not intervening in a lot of their decision making or arguments. #1's best friend is our next door neighbor. Those two girls love each other 90% of the time. However, girls being girls, they have their tiffs, and I do not intervene or offer advice unless directly asked. Even then I am trying to keep it pretty general. I want her to learn how to problem solve and navigate friendships without me hovering over her. I do it with the Dudes as well, but they don't have the same level of drama as their older sister. Their biggest issue has been someone knocked over the other ones Lego tower and they were never speaking to each other again. That never lasts.