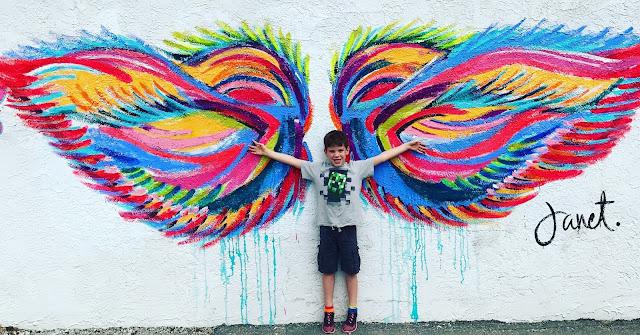 It's no secret that being an adult is hard. Being a parent is really hard, especially with the bombardment of social media and other outlets. Everyone has an opinion of what you should or should not be doing, saying, eating, etc. It's exhausting when you have average "normal" by society standards children. Throw in a little boy who is viewed as a little different and things get 10x harder.

A few weeks ago my favorite musician, P!nk, accepted the Video Vanguard Award at the MTV Video Music awards. Her speech that evening struck a cord with me. At the time I could not place my finger on why it affected me so much, but this morning something happened, and I understood.

I have made no secret that #3 is different than other kids. He is loving, affectionate, empathetic, and will stand up for anyone he thinks has been wronged. He loves Minecraft, his laser guns, Five Nights at Freddy's, and the color blue. He also loves Queen Elsa, having his fingernails painted and wearing his hot pink shoes. I have blogged previously about #3's differences that you can read here. #3's differences are what make him the beautiful child that he is. If I had my choice I would keep all my children in a bubble and keep them from the outside world forever. I can't do that, so my next best choice is to prepare them for the outside world, and let them know that not everyone will love them. I have taught them from the beginning that they are perfect the way they are and we don't change for anyone. P!nk said it best in her speech--“... we don’t change. We take the gravel in the shell and make a pearl and help other people change so they can see more kinds of beauty."

I have noticed over the last few months that #3 has become more sensitive to what others say and do. In July we went on a family vacation to Texas. One day we stopped for lunch at a Chick Fil A in New Braunfels, Texas. #3 had on his hot pink Nike shoes that his sister had given him. While Mr. Mayer and I ordered lunch all three kids went to the play area. A few minutes later #1 was at my side crying because a little girl in the play area was making fun of #3 for his pink shoes and #1 didn't know what to do about it. When I went to the play area I heard the little girls words and saw #3's face as this tiny little creature was telling him that boys can't wear pink shoes and it was a girl color. I went Mama Bear. I told the little girl that pink is just a color and anyone can wear any color they want. A few weeks later #3 asked to donate his hot pink shoes because he didn't want them anymore. My heart broke a little.

Then this morning my world shook, and my heart broke in half and I questioned my parenting. Ten minutes after school started the school nurse called me to come pick #3 up because he said he had diarrhea. Initially I was angry. I know that when he is upset about something that saying he has diarrhea is his go to illness. I knew this morning that he was not sick. I was initially angry because it was disrupting what I wanted to do today. Selfish, but that the truth. I go to the school and sign him out. While I am sitting there waiting for him to come up front the school counselor comes to speak to me. A knot formed in my stomach. She sat down and started telling me that a teacher overheard another student making fun of #3 this morning. The teacher stopped it, but the damage had been done and #3 was upset. DING DING DING. That explains his sudden bout of diarrhea. Then I feel terrible because I was upset about my plans getting messed up. The counselor continued to talk and discuss how we can help him, and that in November they will be doing a compassion unit for the whole school. I explained that we discuss with #3 not everyone will understand or accept him, and he is perfect the way he is. I offered to provide a few books for her to read with the kids on differences and she balked at the suggestion. She then starts stumbling on her words and asks "Don't you think there is some counseling, or something available for kids.....kids, um....like him, that think..." this continued and I knew where she was going and I knew the words she was unable to say. I got angry. Really angry. I was not angry at the idea that #3 could be transgendered, gay, bi, or whatever else he may be. Because if and when the time comes we will cross that bridge, and my love for him will never change. My goals are to raise happy, loved, well adjusted children who are not assholes. I was angry that she could not say the words and could not see the real issue, which was not #3. This situation was not his fault. I stopped her and said we weren't there, and that was not the issue. He likes pretty things and having his nails painted. He also has an older sister who he adores, and the only time she ever pays him any attention is when he lets her paint his fingernails or when he plays dress up with her.

#3 and I came home. I sent him inside and I sat in the car for a few minutes and cried. My heart was broken in half for this beautiful little boy. Then, I put on my big girl panties, went inside, and #3 and I talked about what had happened. I remembered P!nk's speech from a few weeks ago and it felt even more relevant to me in this moment. I told #3 that we don't change for other people, and he is perfect exactly how he is. We then spent 30 minutes looking at pictures of famous boys who like to wear fingernail polish. We listened to David Bowie, Prince, Michael Jackson and some DNCE. Then we looked at #3's favorite "You Tuber" Joey Graceffa who loves color and always has amazing fingernails. #3 was really excited to realize that Joey had painted fingernails, and this Mama, who does not understand her children's fascination with Youtube, is grateful for Joey Graceffa today. We also made plans to go get manicures soon with our cousin, and some of #3's sparkle was back.