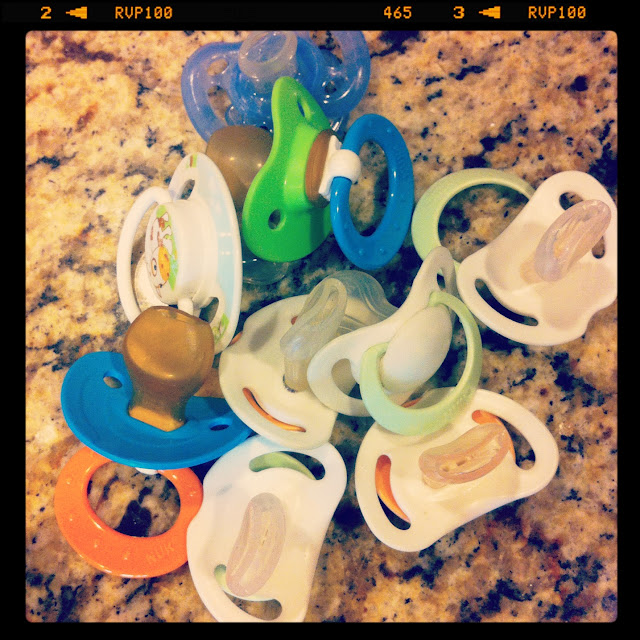 Wow!! I temporarily lost my mind Saturday night and cut all the "binkies." Yup. Cut the tips off of all of them. I had enough. I was tired of hunting for them. I was tired of fighting the Dudes for them. And mostly, I was tired of the temper tantrums when I wouldn't let Owen have one. Saturday night as I was trying to get him in the bathtub he threw an epic tantrum because he wanted a "binky." The rule has been for over a year they only get pacifiers at nap time or bedtime. Over the course of the last two weeks Owen had started going into his room and getting a pacifier and laying on his bed so he could have one. He had also been trying to sneak them out their room. One time he even hid it down his shirt when I tried to take it away. Carter isn't as attached to the pacifiers as Owen has always been. He likes to have one, but there are plenty of times he has gone to sleep without it in his mouth. When I came to my senses Saturday I started to feel bad. I have always felt a little guilty for letting the Dudes have pacifiers. Diva never used one. She just wasn't interested. I tried to give her one. Just never took. The Dudes left the hospital with pacifiers. Owen has remained attached to one for the past 25 months. Their Dentist has been telling me for months that I needed to take the pacifiers away. I knew that they were older and I should take them. I felt that when they could request one it was time to be done. Well, we had gone past requesting them. So Saturday...I sat in the living room feeling like a horrible Mommy as I listened to the little guys scream bloody murder for nearly an hour. Mr. Mayer was no help. He would probably let them keep pacifiers until college. He thought I was crazy too. After about an hour there was silence. Whew! One night down. I was prepared for a battle. I was sure that it was going to take days for the screaming to stop. The next day at nap time I told the Dudes "the binkies went bye bye." They both just stood there staring at me for a minute. Like they were really processing what I told them. They took a nap without protest. Same thing that night. I told them "the binkies went bye bye" and didn't get a whimper of protest. Repeat process on Monday. Monday morning Owen started walking around the house waving and saying "bye bye binkies." Today they had Mother's Day Out. I was NERVOUS about how this was going to go. I told Ms. Stacie that the pacifiers were gone and that I had told the boys that they went "bye bye." I left a couple of stuffed animals for them to hug at nap time and left. The rest of the day I festered. I was sure it was going to be tantrum city. When I went to pick them up Ms. Keri brought them out. I asked her how nap time went. She said that it went great. They didn't give any protest or ask for pacifiers. Wow!! Unbelievable. I was completely prepared for a battle royal with these guys over their pacifiers and they barely gave me a fight. I'm not complaining. I'm relieved. It was a much better outcome than I ever imagined. I don't know how I got so lucky. I didn't expect it. As I sit here typing this I am thinking that I may be jinxing myself. Tomorrow they will get up and insist on having their pacifiers. Ugh...for tonight I am going to celebrate my small victory and pat myself on the back a little.
Also on the docket for this week....we started taking naps in the big boy bedroom this week. Monday didn't go so great. Hoping tomorrow is a little better. It's a whole new routine for all of us. I'm hoping to start with naps and then bedtimes and then make the complete conversion. I have plans for the downstairs bedroom. Though I have a reservations. Are they to young to be upstairs? It's going to mess up Diva's routine. Is that fair to her? Am I rushing things? You can see where I am my own worst enemy. I can second guess the crap out of anything.