Every Once And A While... 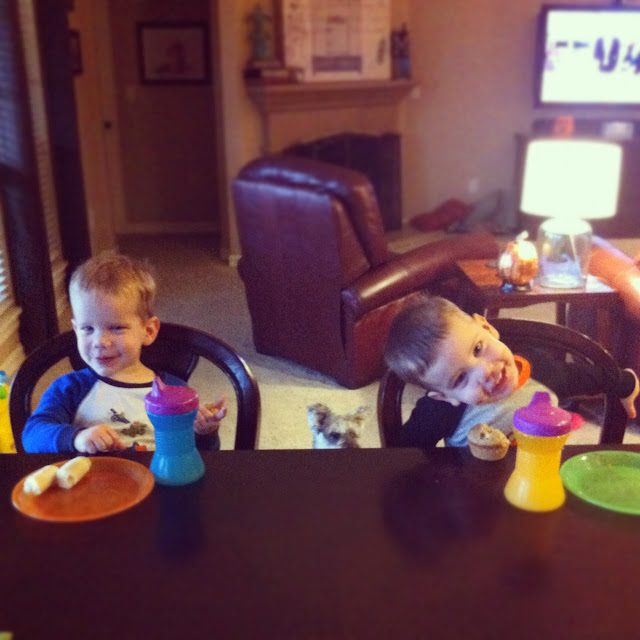 Every once and a while the Dudes surprise me and do something so sweet I just have to stop for a minute. It happened this morning.  The Dudes were awake, but as is normal they were happy so I left them in their room for a little bit while I drank some coffee and ate some breakfast. I was almost done when I heard a horrible terrifying scream come from their room. I knew it was Owen. I looked on the camera and saw his arm was in the top drawer of the changing table. We keep their pacifiers in the top drawer. Nothing else is in the thing, just pacifiers. The Dudes like to put their "binkies" up and get them out a million times at bedtime and nap times. He has gotten his arm shut in the drawer before but this time it looked different. I ran into the room. He was on his tip toes at a weird angle. I free his arm from the drawer and he is hysterical. I look at the arm and move it around. I was picturing my trip to the ER. His arm seems fine. We rock a minute in the rocking chair. Carter gets in my lap with us and rocks. Then Carter realizes that he wants breakfast and takes off for the kitchen. Before Owen and I get in the kitchen Carter is sitting in his booster seat. I sit Owen in his and make their breakfast. Owen is still crying, but not as hysterically as before. I keep an eye on him to make sure his arm is as okay as I think it is. He's using it. That's good. Carter is looking at his crying brother and keeps asking "What's wrong?" I tell Carter that Owen hurt his arm. Carter gets a look of concern on his face and says "Hug." He starts repeating himself. As I stand there and watch these boys Carter climbs out of his booster seat. Walks over to Owen's chair and climbs up and gives his brother a big squeezy hug. Owen stops crying.  Carter gets down and climbs back into his own seat and asks for his breakfast. Things go back to normal like nothing ever happened. It was one of the sweetest moments I have witnessed between the boys. Most of the time I am convinced they are going to spend their entire lives beating each other. I have always hoped that they would be good friends and have a tight bond. But, most of the time I'm just not sure. Every once and a while they surprise me like this morning and do something so sweet that  stops me in my tracks. It gives me hope that maybe they will have the relationship that I want for them someday.