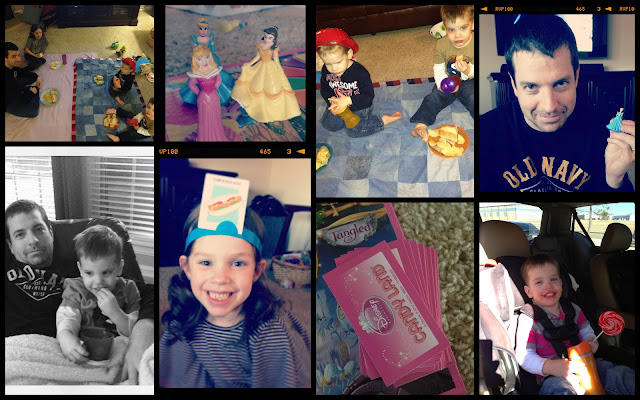 What a weekend!!! Whew! Thursday Olivia was sent home from school vomiting. She vomited twice and was otherwise perfectly fine. I was nervous because her birthday party was scheduled for Saturday. She didn't go to school on Friday, but was back to her normal self. Party was on!! Saturday morning we all get up. I had a lot of things to do before the party at 12:30. The kids were sitting at the table and Mr. Mayer had just sat their breakfast down when Owen threw up. Everywhere. Gross. Well....dang it. Mr. Mayer and I decided that there was no way we could let Owen go to the party. Mr. Mayer would stay home with him and I would take the other two with me. I took Olivia and Carter with me that morning while I ran my errands. We came home so Olivia could get dressed and I could fix her hair. That kid has crazy hair. Then we were off again. One of the hardest things I have ever done was leave the house with Owen crying because he couldn't go with us. The party was a success! She had a gymnastics party and the facility had it down to a fine art. Everything was organized and well oiled. The kids had a fantastic time. Carter was in heaven. He had a great time playing and running with the big kids. We opened her gifts at home so that her Dad could participate (and it saves time). Olivia got all sorts of games, crafts and doll/doll accessories. She was thrilled. She got the game Candy Land as a gift. There was no card on it. Drawback to opening gifts at home~I have no idea who gave her that game. It stresses me a little since I don't know who to send the thank you card to. Arg!! Sunday was a lazy day. It was Superbowl Sunday. We had zero plans. Olivia requested Sub sandwiches for dinner. Wow! Easy! That afternoon we spent the afternoon playing Candy Land and Headbanz with Olivia. She loved it. She is already asking to play again next weekend. That evening we turned the football game on. Owen and Carter kept saying "football!" and "Go Pokes!" Poor guys were so confused. I decided it would be fun to have a picnic with our sandwiches at dinner. So I spread some blankets on the floor, made some sandwiches and called the kids in. They seemed to enjoy themselves. The boys didn't eat their sandwiches, they did eat their weight in pickles. I guess something is better than nothing. Later we put the kids to bed and I watched the Beyonce half time show. I loved it. And I loved her leotard. Seriously. If I looked like Beyonce I would probably wear a leotard every single day~with no pants. Mr. Mayer says he would be fine with that.