By Jayna Mayer August 08, 2014
For all my FB friends you have seen this. I just cleaned it up and put it in a nice little package. Just a recap of our time at Disney World. 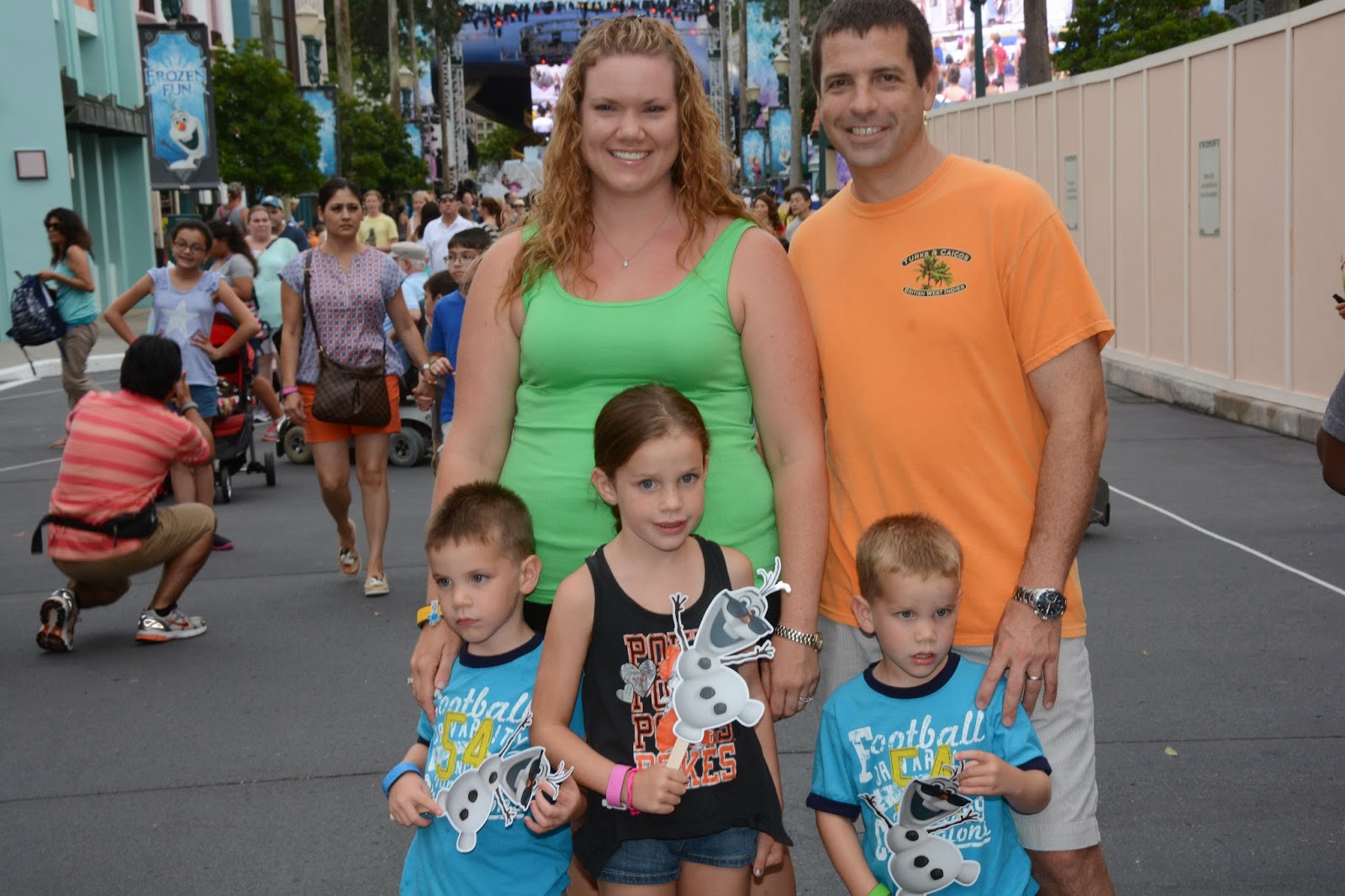 Captains log 02: we survived our first full day of captivity. We are becoming enmeshed with the local culture and adapting to our surroundings. The First Mate and I have found a local source of liquid and are taking full advantage. The soldiers in our company have maintained a steady state of wakefulness and have taken full advantage of the indoor plumbing. We have walked many miles and are told more to come tomorrow. So far we have all maintained our composure and have not turned on each other. It was touch and go with soldier #2 this afternoon when he was not rewarded for whacking some moles or shooting his target. However, after being distracted by dinosaurs and food all was well.
Captains log: Star date 03-we remain in captivity. I am unsure if our captors are sympathetic to our situation or wish to torture us. We have witnessed many stages of emotions. This morning we were taken to a holding cell. I'll admit the First Mate and I were nearly broken at this colorful cell. The First Mate nearly succumb to the unusual techniques. We held fast to our positions. Our futures were questionable after soldier #3 pulled down his pants in the middle of the cell and declared to everyone around that his penis was too big and would not go down. After the First Mate and I composed soldier #3 and redressed him the soldiers were all taken into another cell where they were cleaned, shined and sprinkled with pixie dust and pirates treasure and sent back to us. Afterwards we were all very hungry. Our captures sent us on a long journey through a magical land full of royalty and beasts. It was a friendly land and everyone was happy to be there. So happy in fact they were singing and dancing in the streets despite the torrential downpours that have been occurring on a daily basis. We were treated to a small feast to fill us since the First Mate was near mutiny levels and we were considering deserting soldier #2 and the next rest stop. After our feast our captors marched us to a strange land and sent us on a ship into the galaxy where we went to battle with an evil villain who called himself Zurgg. We defeated the villain and returned back to earth. In the evening we were treated to another feast and liquid stress relief. For our dinner our captors served us the legs of an Alaskan King. We are hoping that we will not meet the same fate. Until tomorrow….

Captains log: Star date 04- we continue to travel through this strange land still unsure if our captors are friend or foe. Today we feasted in the castle of a beast that had talking candlesticks and dishes. I'm confident I saw a clock talking as well. We were introduced to Princesses from near and far and are told there are more still to meet. We were given archery lessons by one and had to travel deep under the sea to meet another who combed her hair with forks. They were all very kind and beautiful. We rode flying elephants and met an evil sea witch named Ursula. The torrential downpours continue. This makes for unpleasant traveling. However, it did allow for the soldiers to have some much needed rest. For dinner we went in a time machine back to a land of black and white TV's and "Mom" did the cooking. She was a VERY good cook. Afterwards there was singing and dancing in the streets with royalty from Arendale and colorful explosions in the sky. The Queen can make ice with her hands. It was very enthralling. I'm afraid the soldiers are all suffering Stockholm Syndrome. They joined in the celebrations tonight and knew all the words to the local songs. They are quickly forgetting about their homeland. 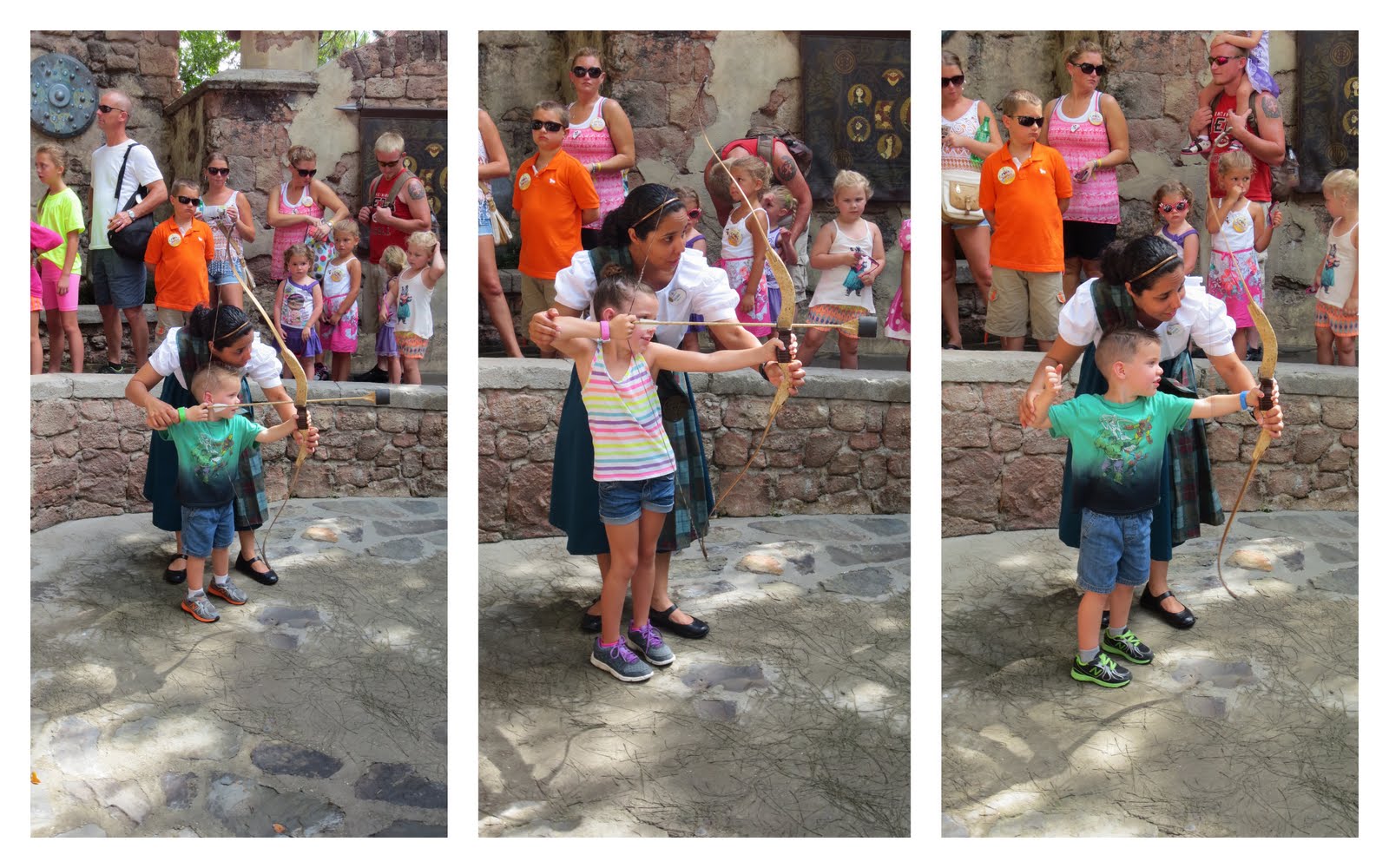 Captains log: Star date 05- the monsoons continue. The First Mate and I have been a little disheartened by the situation. We remained in our cells for the day. We only left for food. We attempted some water recreation but were thwarted by our captors. Eventually after our evening meal our captors allowed us to enter the recreation area. The soldiers were especially delighted to splash and play by the moonlight. There was even a warm bubbly pool to soak in that the soldiers found very exciting. Tomorrow we will attempt to venture out to other magical lands. We are hoping there is a reprieve in the torrential downpours.
Captains log: Star date 06- The monsoons that plague us were absent today. It was very pleasant. We left our holding cell for the day and traveled to another magical kingdom. This kingdom was anchored by a large golf ball. There were many nations in this country. We were able to travel from Morocco to Germany in the matter of minutes. Soldier #1 received her first tattoo while we were visiting the nation of Morocco. She is quite taken with it. Soldiers #2&3 have become snake charmers and we are now traveling with two cobras. The First Mate and I found liquid refreshment and food in Germany and we spent a great deal of time there. We traveled into the giant golf ball and were transported into outer space. Afterwards we were led into a room where we were greeted by the ruler, a giant mouse. He was accompanied by his wife and a giant dog who I believe may be one of his commanders. They were very friendly to us. Later in the afternoon we again traveled under the sea and met a friendly turtle named Crush. We also took a boat ride through the tunnels which the soldiers really enjoyed. When we left that kingdom with our cobras in tow we journey to a rustic campground and were treated to libations and BBQ. There were entertainers and lots of dancing that the soldiers all enjoyed. The giant mouse that seems to be in charge here was present and dancing with everyone. He brought his wife and friends with him. He is a friendly ruler. Soldier #3 is quiet smitten with the wife of the giant mouse. After the celebration was over we began a long journey back to our holding cell. There the soldiers were insistent on another moonlight adventure in the water. The First Mate and I obliged. 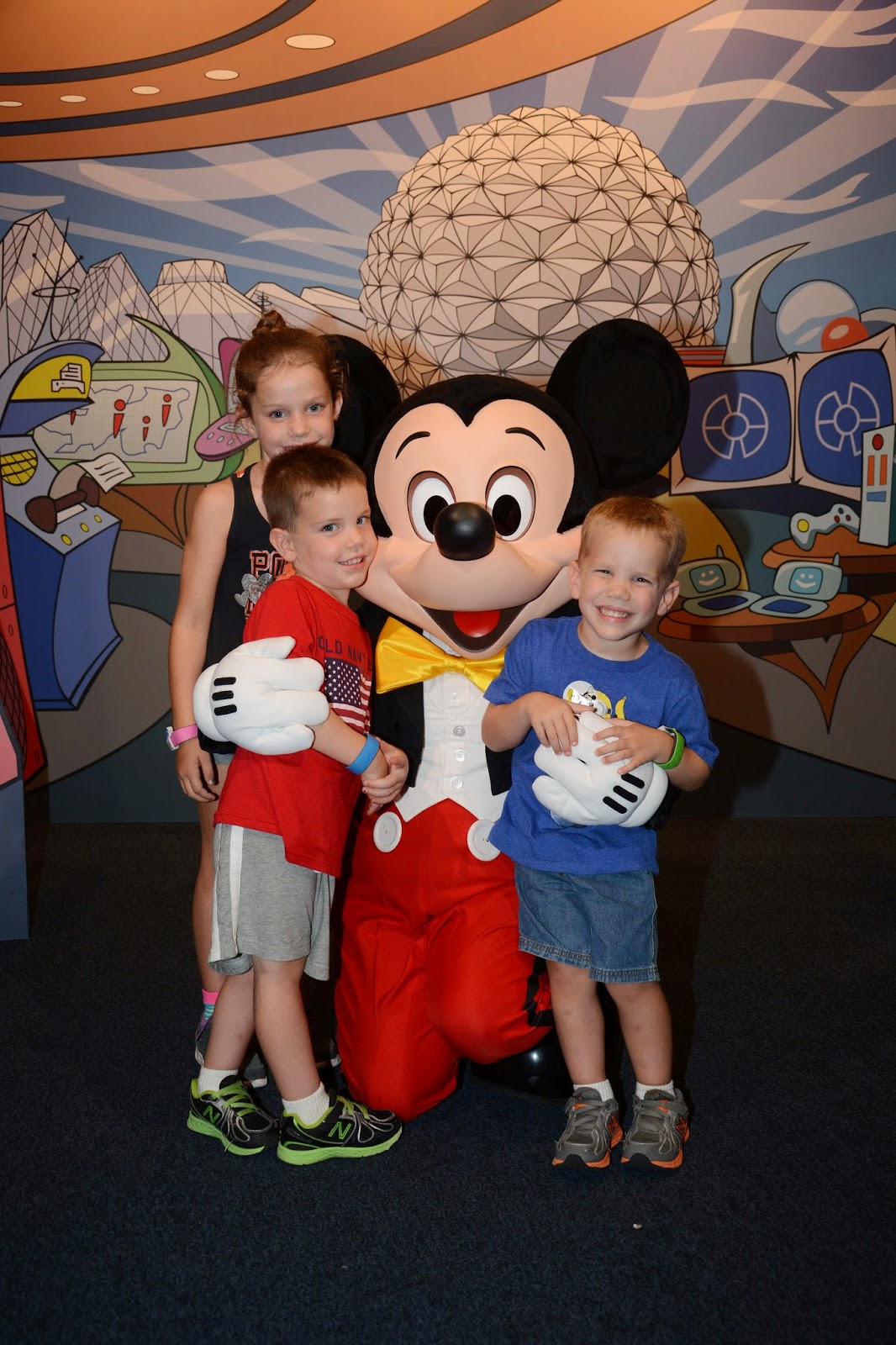 Captains log: Star date 07- this will be my last report. We are being released tomorrow and returning home.The monsoons held off for another day. We travelled to a small village that was entirely water. The soldiers loved it. Soldier #1 and I spent some time in a lazy river with some of the locals. Today I learned that the First Mate has a dislike for water parks and lazy rivers. After our day in the water we went back to our holding cell to put on dry clothes for our next destination. We decided to fore go showers. The temperatures combined with humidity are making showers pointless if we plan on stepping outside. After we changed and everyone had shoes on (surprisingly this is a VERY difficult task) we journeyed to a near by island for a Luau. We were treated to a traditional feast and taught dances from our hosts homeland. There were women in grass skirts and men who danced with fire. The soldiers were mesmerized. After the celebration we returned back to our cell and had one last moonlight dip. Upon returning from playing the soldiers started showering. Soldier #1 began screaming from her shower like someone was trying to kill her. As I enter the room prepared for a bloodbath I discover that a Godzilla like creature had snuck into the shower. As she was getting in he viciously attacked and caught her off guard. I caught the creature for soldier #1 and held it at bay until the First Mate and soldiers #2&3 were done with their showers. I explained to the First Mate about Godzilla and how he viciously attacked soldier #1. The First Mate and soldiers #2&3 inspected the creature and then took it to an off sight location. Soldier #1 was able to complete her shower. I have attached a picture of Godzilla for your reference. Please note that the object in the picture is slightly larger than the actual assailant. 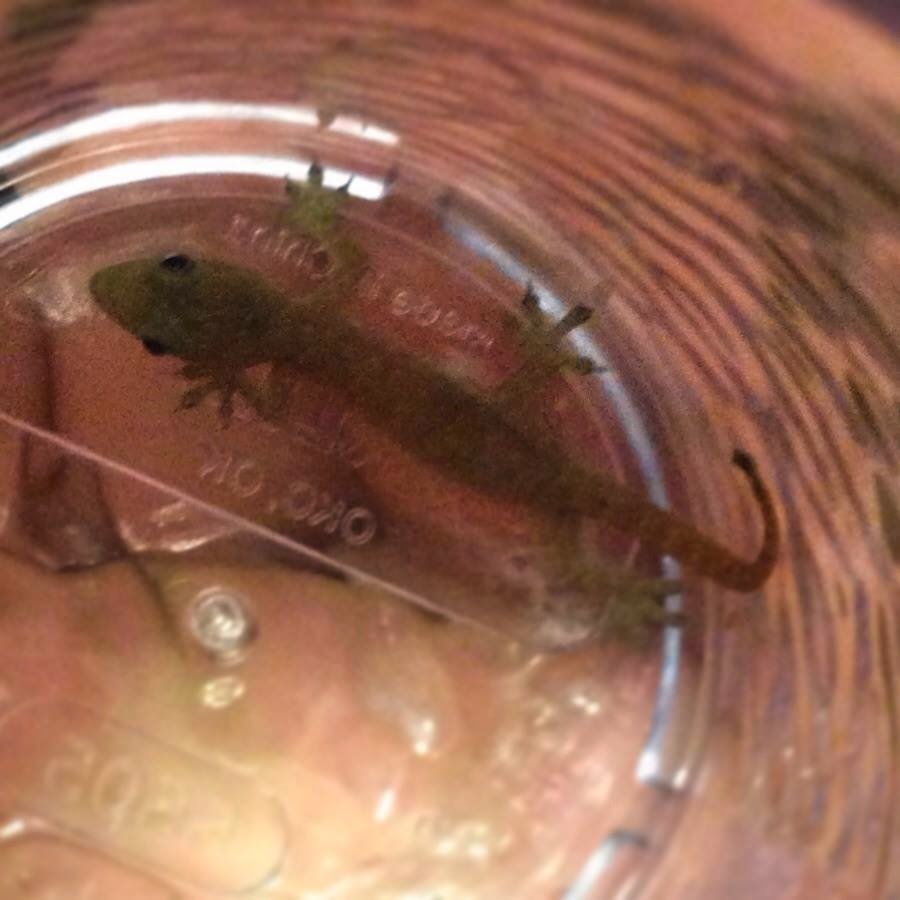