By Jayna Mayer August 14, 2014
The Dudes are growing and changing on a daily basis. When I look back to a year ago to today it makes my head spin. A year ago I wasn't sure #3 would ever poop in the potty and I didn't think either one of them would ever speak clear enough to understand. Today they are fully potty trained. Well...except when around water. #2 has the uncanny ability to have to poop anytime he is near a body of water. Yes. He STILL poops in the bathtub it you don't watch him. And when you go to a swimming pool prepare yourself. 20 minutes after arrival he will HAVE to go poop. Immediately. There were a few instances of poop in the pants at the pool. I had to threaten him with baby diapers to get him to stop doing that. Sheesh. Anyway...back on task. Growing up. Changing. They are BIG boys these days. As Mr. Mayer frequently points out they are REAL PEOPLE. It's amazing. The most recent thing they have been doing consistently is dressing themselves. It just happened one morning last week. First #2 came downstairs. Fully dressed and even matching pretty well. #3 saw this and he raced upstairs and came back fully dressed. Matching...eh...not so great. And, he has developed an obsession with long sleeve shirts. We live in Eastern Oklahoma. It is August in Oklahoma. While not as hot as past summers, it's still hot, and my special little boy is wearing long sleeves. He assures me he won't get hot. He pairs them with shorts. Matching is not necessary. He is related to #1 after all. To be honest, both boys are so proud of themselves that I am not going to make them change. If he wants to wear long sleeves I'm going to let him. Unless we have an important function or pictures. The I get to pick the clothes. This morning was meet the teacher at the Dudes preschool. I have always been of the opinion I am not going to go out of my way to dress up or do anything special for meet the teacher or conferences. They are going to see my kids day in and day out and why start off the year with a lie. I'm going to let them get a clear picture of what they will be dealing with through the year. I told the boys to go upstairs and put underwear on (you would be surprised, but this daily reminder is necessary) and to get dressed. I was pleasantly surprised when #3 came downstairs in a t-shirt and shorts that matched. Wow! Then #2 came downstairs with #1 close behind. She proudly announced that she helped him get dressed this morning. He proudly announced he was wearing his camo shorts and looked so cool. The camo really brought out the purple in his purple and white button up shirt that was accentuated with an orange bow tie. Yup. He was a sight to behold. As the good mother I am I had to take a picture. Wouldn't you? However....after I took the picture #2 decided he did not like the bow tie look and really wanted to wear his Jake and the Pirates t-shirt and went and changed. 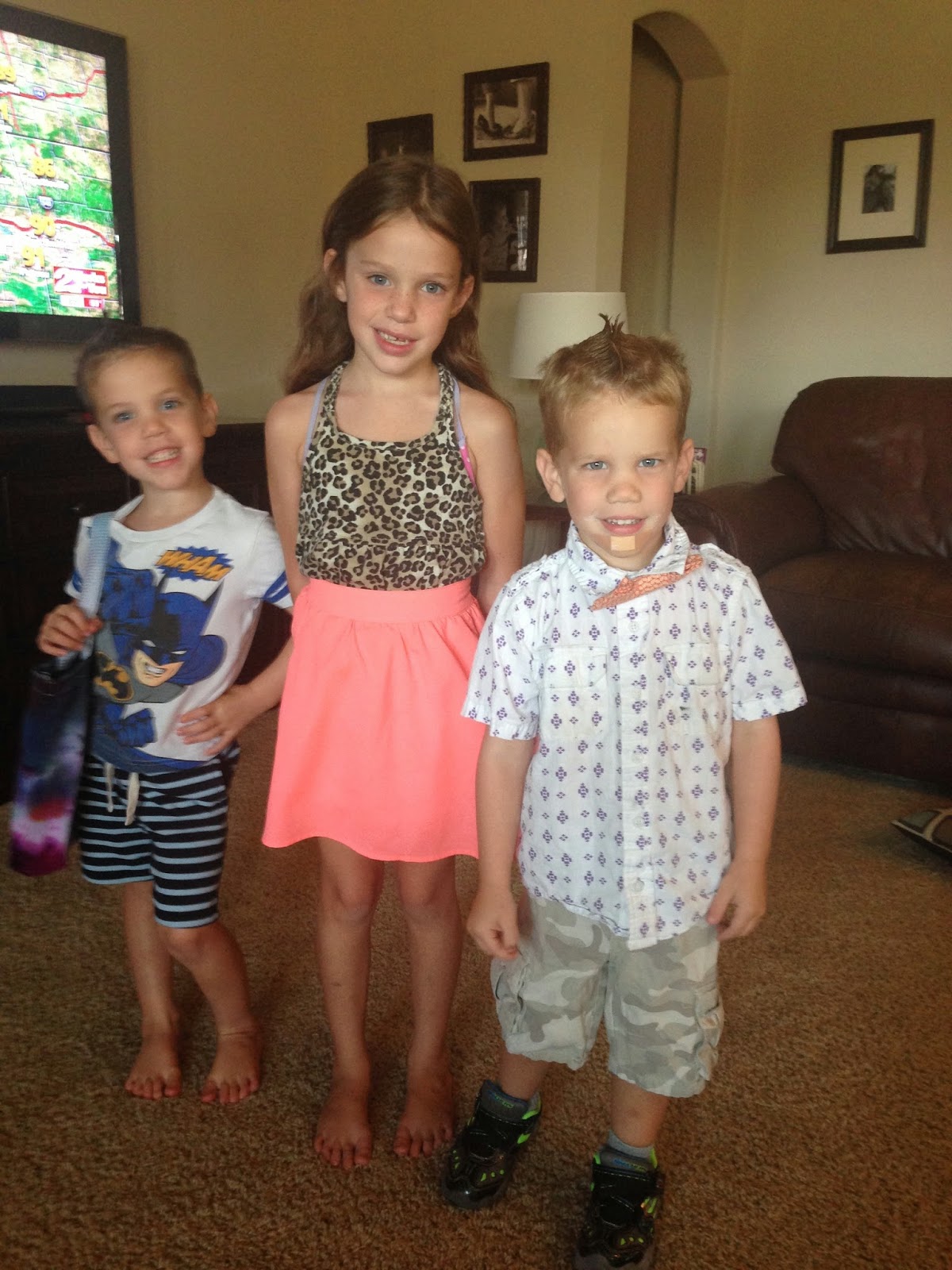