By Jayna Mayer February 14, 2011
I'm not an overly gushy person.  In fact Mr. Hubs is definitely the more affectionate one in our relationship.  I have no reason or excuse for it, it's just the way I'm wired. I would like to change that, but I always stop myself. Again, no reason for it. Usually I let/make Mr. Hubs plan a special Valentine's Day Date. Partly because the first year we were married there was a movie fiasco and he has never let me forget it. The movie Monster was in theaters over Valentine's that year and I really wanted to see it. So, for Valentine's Day I drug Mr. Hubs to see it. It didn't leave him with a warm lovin' feeling. I loved the movie. Since then he has planned our dates. He always does really good. This year I wanted to shake things up and do something special. So, I planned our date. It drove Mr. Hubs crazy because he knew I had something special planned he just didn't know what. He doesn't like surprises. So, the day of our date came and I told him we were going to take pole dancing lessons and then go to play bingo, it would be a really late night. He looked at me like I was crazy. In reality I had signed us up for a cooking class. We could take wine so I had a friend smuggle me a bottle I hid in my purse so Mr. Hubs wouldn't see it. I could tell Mr. Hubs was nervous. He thought I was going to make him do something horrible. We pulled up to the place and Mr. Hubs got a huge smile on his face. He was very surprised. The class was a lot of fun. We will definitely be doing that again. The class was over with at 9 and we had a babysitter so that was too early to go home since we don't get out much. We had both been wanting to see Black Swan so I thought seeing that after our class would be fun. Ugh...I like weird, but that movie was even weird by my standards. Mr. Hubs is never going to let me pick another movie again! Over all I will say our special date was a lot of fun and Mr. Hubs was really surprised.
That was Saturday...
Today is "Valencetimes Day" as the Diva likes to call it. She danced off to daycare this morning carrying her little Valentine's cards for her friends. She was very excited! She had a party at school and her surrogate grandmother took her flowers and picked her up early. Very.Big.Deal. She dressed up for her party at school today 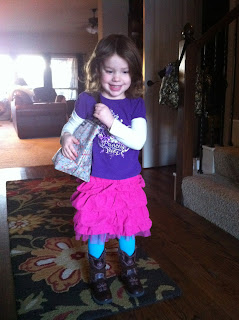 Tonight Mr. Hubs took Diva on a special date just him and her. She got dressed up again for her date with pink leggings, purple shirt, mis matched socks and....gold glittery dress shoes. Mr. Hubs was appalled that he had to take her in public. Diva told her Daddy that she wanted to go "to the place with sofapillows." That's Diva for Ted's and sopapillas. As usual I asked Diva what the best part of her day was and she said "my date with Daddy was the best." Awwww.....so sweet.

All in all it was a pretty good Valentine's Day. Mr. Hubs and I agreed that since we recently bought bedroom furniture we wouldn't get any gifts for each other. He never said that the kids couldn't get him anything ;)