Wow! Time is really flying by...these dudes are 14 months old already. They are busy little bees these days. I can't take my eyes off of them for a second. 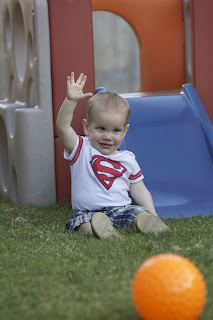 Owen~ Looking at this picture you would think he was a Trekkie...maybe he will be. Owen is independent. He will play by himself and LOVES putting small things into bigger things. I have found some very interesting things in the laundry baskets over the past couple of weeks.  Anytime he hears music he starts dancing. It's an awkward head bobbing booty popping type of dance. No matter what kind of song is on. It's adorable. He loves his milk as well. It's a full throttle melt down when he runs out. Once Owen warms up to you he is all grins. It just takes him a few minutes. He also loves to talk. He can say a few basic words (Mama, Dada *favorite!*, Hi, Bye). He will shake his head yes or no accordingly. Most of the time he is just talking gibberish and looks at you intently like you know exactly what he is talking about. 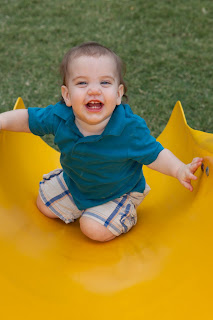 Carter~ Carter. Carter. Carter. I feel like a stuck record lately with the "Carter! No No." Then he looks at me, grins and does it anyway. *Sigh* The kid is a climber. This week he is climbing on his trucks and then onto his toy shelf. I'm pretty sure it is going to topple over on him before long. He has also learned to climb onto the top of the play set in the back yard. It's not so much the climbing to the top platform that is the problem. He doesn't know how to get down other than run off the edge of it. I see some broken bones in my future. At the moment I have the stairs on it blocked off with an inverted piece of baby gate and a small Little Tykes slide. It's pretty ghetto, but working. Carter also loves to have books read to him. We read millions of books during the day. Carter is a charmer! If there is a person within a foot of him he is flirting away. He has learned to wink and blow kisses which he thinks is a big deal. He can also say a few basic words like his brother.
These boys are really starting to put things together. I find it amazing. I can tell the boys we are going bye bye and they will go to the back door and wait for me. When I open the garage door they will walk out to the van. I can ask them if they are hungry and they go to the kitchen. I can tell them to go get the puppy and they will bring me a stuffed dog. I pull the curtains in their bedroom and they both run out of the room so they won't have to take a nap.
Naps~ that is the biggest change lately. We went to one nap this week. I was not ready for this. I really like the down time 2 naps a day gives me. However, I am able to get more things done in the morning. I was even able to go to spin class at my gym this morning. That is pretty rare. They lay down around 11:30 after lunch and I have been having to wake them up at 2:15 to go get their sister. This is pretty fantastic. I get a big chunk of "quiet time" during the day.