By Jayna Mayer November 15, 2011
I have to give props to Mr. Mayer. He's really good at the birthday thing. The first year we were married he took me to a spa in Hot Springs. I had never been to a spa. It was fantastic. Another year he took me to Kansas City. Last year he sent me to Dallas with a friend for a weekend away from kids and all the shopping I could handle. This year he really raised the bar and took me to Las Vegas. I had never been. It was very exciting. The trip was supposed to be a surprise. I just knew we were going somewhere. He accidentally spilled the beans a couple of weeks ago. However~I still didn't know where we were staying in Vegas.
I was a little apprehensive about leaving the kids. It was only the 2nd time I had ever left Owen and Carter. Lame. I know. Olivia was doing a song at school on Friday for Veteran's Day and I was a little sad we were going to miss that (but a big thanks to the mom who recorded it and shared it with me). But, I was so excited to go somewhere.
We board our plane and I learn that you can get drinks on a plane. Yes. I have flown before. Just didn't know you could get grown up drinks on flights. So, I drink my first big girl drink on an airplane.
We arrive and Mr. Mayer tells the cabbie to take us to the Bellagio. Sounds nice (It was).


By this point I have my face plastered to the window taking in all the sights. It's impressive. There is A LOT to take in. We walk into the Bellagio and it's wall to wall people. We check in and go to our room. Mr. Mayer says that there is somewhere we have to be. He doesn't say where. We drop off our luggage, change shoes and shirts and leave again. We take the Monorail to the MGM Grand. We walk in and Mr. Mayer goes and picks up tickets for....KA! So excited. The show doesn't start for a few hours so we go have some sushi (yummo!!) and play a few slots.
Now...gambling. My experience with gambling consists of me going to the Hard Rock Tulsa once with $20. I didn't really know how to play the slots and I lost all my money immediately. I didn't really like it. So I figure we are in Vegas. Maybe I'll hit it big. After an hour and a small fortune Mr. Mayer finally agreed with me that I was a terrible gambler. I was even bad luck for him. He would be up several HUNDRED and I would come sit by him and he would immediately start losing. We decided that gambling wasn't for me. I also agreed to stay far away from him when he was gambling. He did much better that way.
Ka was amazing!! I really liked it. Saturday we spent the day doing some window shopping and looking the different hotels. Everything was so over the top. I really liked all the people watching!! And you could take alcoholic beverages to go.  People were just walking around with them. I had a beer and felt really weird the entire time I was carrying it around. We did the aquarium at Mandalay Bay. We went and saw the Bodies exhibit and Titanic at the Luxor. We saw New York New York...explored the Venetian (another very nice place). We took in Cesar's Palace.  I'm sure there were some in between there. We could go from hotel to hotel without ever seeing daylight. It was amazing. Mr. Mayer was excited because we found an authentic Irish Pub. We went and had some fish and chips and he had a Guinness. Everyone in the Pub has Irish accents. I decided it was a job requirement. Mr. Mayer was in Heaven. 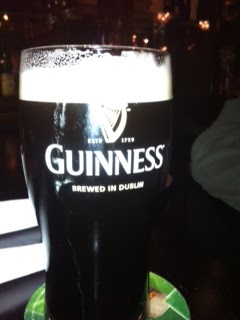 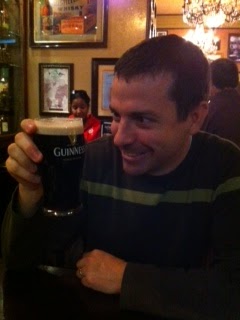 Saturday night we went and saw the Blue Man Group. Another fantastic show. It was so much fun. Sunday we had to leave. I was exhausted. Time doesn't exist in Vegas. It would be 3am before I even realized it. And since I was on Oklahoma time I was awake at sunrise. It was irritating. Mr. Mayer and I were exhausted when we came home. It was a very happy birthday trip. I owe a big thank you to my wonderful friends who kept the kids so Mr. Mayer and I could take this trip. Thanks guys!
The kids were all excited to see us. And all sick. Awesome. So, the past few days have been spent taking care of sickies. I'm hoping fevers break and coughs stop today. That may be wishful thinking.