By Jayna Mayer November 28, 2011
Ack!! It's Monday! What the What?! I'm not sure where last week went. Hope everyone out there had a fantastic holiday. I had big plans to write a Thankful blog last week. Didn't happen. In fact I had 3 or 4 blogs written in my head. Those didn't happen. I could go and write them all and inundate everyone with 5 blogs tonight. I won't do that to you. I will just try to write the blogs as they come to me. It may happen.
Just to catch you up on this crazy Mayer clan.
Mr. Mayer: The Pokes had their first loss recently. How do you think he's doing? Bedlam is this week. Check in with me on Sunday.
Shrek and Donkey: Little bit of a runny nose but croup free. Both are running every where. Talking, dancing and causing mayhem daily. We tried the one nap thing again today. I really wanted to go to spin class this morning. I laid them down at 11:30. They slept for about 2 1/2 hours. Great. Around 4:30 this afternoon they lost it. Bedtime came early. I guess they still aren't ready. Bummer for me. I really like that 10am spin class.
Diva: Her fever broke. HALLELUJAH!!! I only had to take her to urgent care 2x and her doctor 2x. The final time at urgent care they did all sorts of tests. Diva functions better if I can really prepare her and let her know what is coming her way. They said 'Lab Work' so I started prepping her. They started with a flu test. I told her it might feel funny and she probably wouldn't like it. After the nurse was done and Diva was in tears she sits in my lap and says "That didn't feel funny. That hurt!" Yes it did baby girl. Yes it did. Then they took "pictures" of her lungs. Come to find out she had some pneumonia in her right lung. Then they had her pee in a tray. She thought that was gross. Then came the dreaded lab work. Aunt Bets offered to come and help with this. I was tempted to let her. I did not like it. It took me and a nurse to hold her down. Then she carried on for 2 days about how bad her arm hurt. I may never get her back to urgent care. However~ thanks to the marathon of tests Diva DOES NOT have mono (whew!). She did have pneumonia and a severe bladder infection. After 24 hours of antibiotics that dang fever broke and she has not stopped since then. She missed 6 days of school and had a Thanksgiving break. We had a lot of togetherness.
Thanksgiving came and went. Watching the parade was a good time. I asked Diva what she was thankful for. Her response~ "Turkey." Anything else? "Nope. Just turkey." Nice. I'm winning at this parent thing. I tried to tell her a few of the things I was thankful for and she rolled her eyes and said "I know...you are thankful for me, my brothers and I guess Dad." Well, those are three of the things I'm thankful for. Thanks for humoring me kid.
So the weekend proceeded to rush by with the same speed as last week. We went to my in laws for the weekend. They have a pretty house with lots of breakables. I was convinced that the Dudes were going to break everything. They tried hard. But, 8 adults were able to keep up with them and take the breakables and hide them in the nick of time.
Which brings us to today. I'm exhausted. I kept dreaming I was pregnant with my second set of twins last night. Mr. Mayer was having a nervous break down and was in patient and I was having to have the babies by myself in a grocery store. Weird.
I took these pictures last week and wanted to share. The dudes l-o-v-e getting to sit on the couch. Here is a moment with Shrek and Mr. Mayer. Precious. 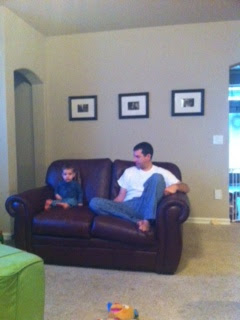 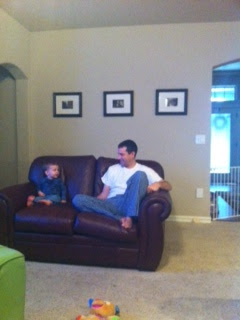