By Jayna Mayer March 07, 2012
I'm done. With babies that is. Asking someone if they are going to have more kids is a tricky question. At least in my opinion. I mean, how do you know? The person themselves might not even know or have decided yet. Especially for a Mom of Multiples. Take me for example...I often joke that I could handle one baby in my sleep at this point. It's true. I think I could. Do I want to? Nope. I've been on the fence about the subject. I've thought several times since I had the Dudes that "Oh, a 4th baby wouldn't be so bad." However, the older the Dudes get the less inclination I have for more. I know lots of women who agree with me on this topic. They are D.O.N.E. I also know plenty that want more kids. I was helping a friend last night with her 4 month old babies. They were tired and fussy. I was holding one who had no intention of going to sleep and was going to fight it all the way. I realized at that moment that I had no desire to go through that stage again. The first 6 months with the Dudes are a blur. I was the walking dead. The last year has been tough, but seems to be getting easier. Sleeping all night has helped. I don't want to go through the baby stage again. I don't want to get up at night for feedings. I don't want to breastfeed again or feel that horrible guilt when I stop. The guys are getting bigger and I see a light at the end of the tunnel when I don't have to cart pack-n-play's around everywhere we go. I'm also closer to having 0 kids in diapers than I was 18 months ago. The day the Dudes started drinking whole milk I felt like throwing a party. I can only imagine the relief I will have the day we are done with diapers. And, if I am being perfectly honest. I hated pregnancy. It was not a glowing pleasant experience for me. I'm looking forward to the next stages with my kids. They all have their own unique personalities and I'm sure that the next few years will be an adventure. 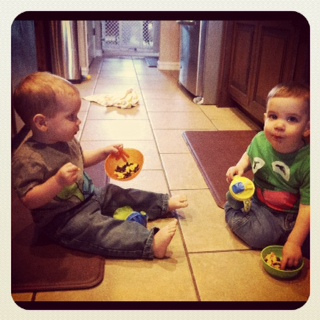