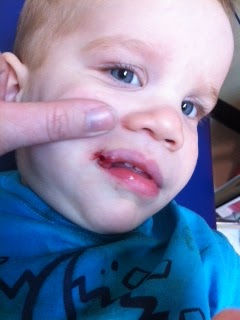 Two nurses came in and swaddled Owen. He hated this. He has always hated to be restrained. I really thought about the leaving the room. I wasn't sure I could keep my composure while my baby cried and I couldn't do anything. I decided I didn't want to be a complete loser so I stayed in the room. On the very far end of the room. Aunt Bets sat beside Owen. Two nurses held him down. I was crushed. Dr. Doug came in and assured me that Owen couldn't feel anything. He was just upset because he was being held down. In the back of my mind I had a nagging voice say "What if he was in pain and could feel it?!" I was so glad when they were through. Owen missed dinner and it was nearing his bedtime. He was drunk and now he had two stitches in his lip. The nurse brought a Popsicle for him. It was his first Popsicle. He loved it. Then they brought him some goldfish. He gobbled those up as well. We head home with my drunk little boy.
When we get home the babysitter is there. Carter is screaming bloody murder from his bedroom. Makenzie says that he had been doing that since she laid him down a little bit before we got there. I change Owen and go lay him down in bed. Both boys cried for maybe 5 minutes. Then they were both out like lights. Betsy and I waited about 10 minutes to make sure they were sleeping. Then we leave and go get some dinner at Osaka (I know. I know. I'm a terrible Mommy for this). Mr. Mayer and Diva would be home soon and I was starving. Not exactly the girls night out we had planned!
Mr. Mayer told me that when we left that Carter spent the evening wandering around the house looking for his brother. This was only the second time that the boys had been separated and definitely the longest stretch of time. I never thought that Carter would react the way he did. Especially at bedtime. But, thinking about it. His brother was gone, someone different put him to bed and for the first time ever he was alone in his bedroom. I'm sure it was terrifying for him. I thought it was so sweet that he went to sleep as soon as Owen was with him.
This morning I was nervous about how Owen would be feeling. I was expecting that his face was going to be swollen and bruised. Last night it was black around his lip and his face was so swollen. Nope. This morning he got up and was his normal silly self. Other than him rubbing his stitches with his tongue you would never know anything was wrong with his face. No swelling. No bruising. Nothing. For that I am thankful. 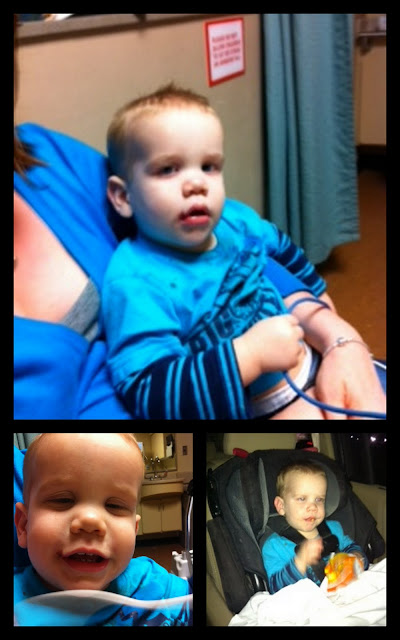