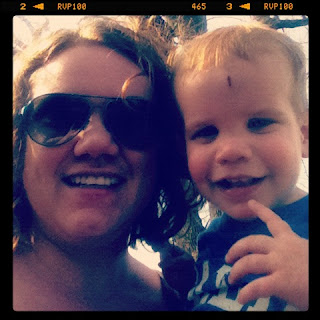 I'm back!! Did you miss me?! Did you know I was gone? We were in the winter wonderland of Angel Fire New Mexico last week for Spring Break. It was a loooonnnnnggggg drive, but a lot of fun. All my kids are snow bunnies and loved playing the snow. More about that some other time.
The weather in OK has been fantastic. I love warm and sunny days. I really love getting out of the house and my kids really love playing outside.
I have mentioned before that taking the Dudes to the park-alone-is impossible. There is only one of me and 2 of them running in opposite directions. This morning my dear friend Megan texted and asked if we wanted to meet at the park to play and have a picnic. Luck would have it Aunt Bets is also BFF's with Megan AND Aunt Bets is on a staycation this week. She was going to play with us. YES! Extra hands! Park here we come!
Megan was making sandwiches for the kids, Bets was picking up adult lunch and I was bringing drinks and pears. I hurriedly dress the dudes. Yeah, they were still in their PJ's. Whatever.  We head to the park. Aunt Bets is getting there about the same time as we do. Megan is right behind us. We head to the play area. I unleash the Dudes. Hmmm....weird. They are playing in the same vicinity of each other. Whuck?! That never happens. This continues for some time. Every once in a while Owen takes off for the grassy knoll right by us. I chase him down and drag him back to the slide.
There is a water feature at the park where kids can splash and run around. They were cleaning the gutters of it when we arrived. They finally finish cleaning (cause that was way to tempting to babies) and leave. The water feature isn't on, but there is some water left on one of the steps. Owen, Carter and the incredibly sweet Savi found it and splashed and had a great time in that little puddle. You had to watch Owen though because he kept putting his face in the puddle and drinking the water like a dog. He's been eating like this too. Maybe I'm letting him hang out with the dogs to much? Normal, right?
After drinking the water and splashing around we go to a picnic table and start eating. Naturally the Dudes don't want their sandwich. They just want the fruit. Oh well. At least they are eating something. We head out after lunch and the melt downs begins. The Dudes take their nap. I feel a little victorious. Of course, with Betsy to chase one while I chased the other helped, but all in all Megan and I agreed that it went so much better than the last time we went to the park.
After nap and we picked up Diva from school we went shoe shopping. Why? Because I bought her new shoes 2 weeks ago and they are already to small. Again I say~ WHUCK?! And the Dudes are scrunching out of their shoes. I mean, couldn't they stagger this a little?
We spend so much time shoe shopping it's dinner time. We grab some burgers because Owen and Carter are yelling at me and go home. After we eat we head out to the back yard to play. Mr. Mayer was working late and not home yet. As soon as Mr. Mayer gets home and steps outside Carter falls off the steps to the slide. The left side of his face and eye immediately bruise and start to swell. Sheesh. My kids are really looking like battered children lately. Between the facial and head injuries their legs are solid bruises.
At least they are completely unfazed by their injuries!