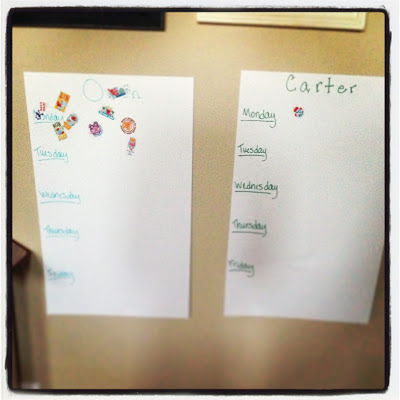 I bit the bullet and started potty training. The Dudes finished preschool last week and don't start their summer camp until June so I thought this was as good a time as any. That and I was getting tired of them taking their diapers off telling me they were yucky. Ugh. Hunting dirty diapers is not very much fun.
I decided I would do the 3 day boot camp I had heard so much about. However, we are still using diapers/pull ups at night~for now. Unfortunately my life isn't one where I can be completely at home. I still have to pick up Olivia from school and her various activities. Other than picking her up today we didn't have to leave the house for anything else which was nice. However, dealing with her this afternoon was frustrating. There were some jealousy issues. I tried to explain that her brother's need my attention right now, but she wasn't buying it. It was a frustrating afternoon. I'm hoping some sleep does everyone good.
So this morning I put some "big boy underwear" on the Dudes. They were very impressed with the "choo choo's" on their drawers. I filled them with juice and pretzels. They thought it was great that I was letting them have juice and snacks. It was a treat. I only have my experience with Olivia to fall back on with the potty training thing. Training her was a hot mess. I'm still traumatized by it. In addition to a horrible potty training experience she has a bladder the size of a flea. I was fully expecting the Dudes to have to pee about 5 minutes after their first drink this morning. It was a full hour and 15 minutes before anything happened. That threw me for a loop! We sat on the potty this morning and got off the potty and immediately peed our pants. Awesome. I was convinced that was how my entire day was going to go. However at some point this morning I caught Owen mid-accident and ran him to the potty. After that he started telling me when he had to go. Wow!! And a couple of times he started to pee in his pants and stopped himself and ran to the bathroom to finish. I was super impressed with his progress. It was much better than I had anticipated. Then there's Carter. That child. He would pee his pants and then tell me. All. Day. Long. There was even one point I had gone into their bedroom for 30 seconds and he pooped in the floor. Then came into the bedroom to tell me that he "make a mess." I told him about every .05 seconds to tell me when he needed to pee in the potty and ask if his underwear were dry. It was like talking to a wall. That kid. I wouldn't even know when he would pee his pants until he would say "Uh oh, I wet." Grrr....Tonight after Mr. Mayer got home he caught Carter mid-accident and ran him to the potty where Carter put a couple of drops in the potty. We cheered and let him put a sticker on his chart like he had filled the potty. I'm hoping that it will click with him soon.
All in all I think it was a good first day. I only wanted to quit about a dozen times. I'm nervous about the rest of the week. I have to have a babysitter Wednesday afternoon so I can take Olivia to a doctor's appointment. Thursday all 3 of them have gymnastics. Olivia has already had a complete freak out because she thought she was going to have to miss gymnastics because of her brother's. Sigh....I re-read the 3 day boot camp ebook I have for reassurance. It said a lot of the time that kids don't get it until the end of the 3rd day. I'm hoping that the Dudes have another great day tomorrow. I'm only mildly convinced at this point in the game that I will never get to leave my house again. Or that I will be forever chained to the potty. I know that isn't true, but there are times it still feels like that.