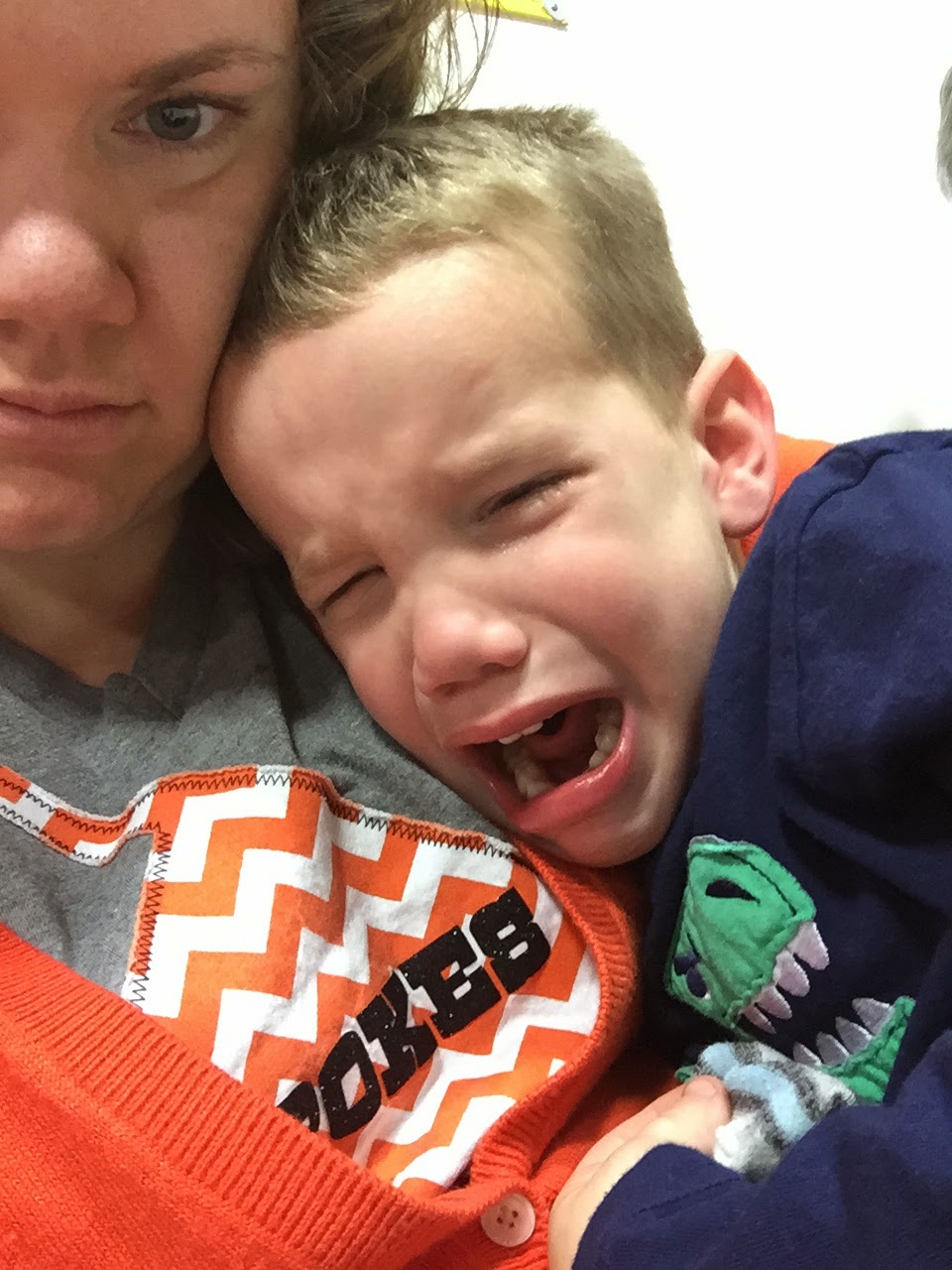 See that sad little face? That little face breaks a Mama's heart. Friday I took the Dudes to a favorite hang out, Bounce U. They have a Preschool Bounce a few times a week and I try and take the boys a couple of times a month. Especially in the winter. It's too cold to play outside and Bounce U burns a lot of energy. They have a particular inflatable that is called a "Cliff Dive." It is #2's very favorite thing in the world. You climb up some stairs and jump off a "cliff" onto another inflatable. Super fun. The boys were there a few weeks ago and #2 got to play on the inflatable. We go Friday and he's told he can no longer play on it because he's too small. They have put a new rule in place stating that the child must be 42 inches to play. 42. Inches. I'm not sure #2 is ever going to be 42 inches. He's a very tiny guy. Needless to say this new rule resulted in a complete and utter meltdown from #2. Straight to an ugly cry. There was no consoling him. To add insult to injury #3 was tall enough for the inflatable. I wouldn't let him go on it though. I figured that would just be too much for #2. So #2 and I sat there at Bounce U while he hysterically cried. An employee came over and asked if everything was okay. I gave him an earful. No. It was not okay. I didn't understand how two weeks ago it was fine for my child to go on the inflatable and today he was to small. The employee got big eyes and explained the new rule to me. He stated that some kids had jumped off improperly and hurt themselves. That's their parents issue. Sorry they got hurt, but it's my responsibility if my child gets hurt. I sign a release saying as much when we check in. And lets face it. It's #2 we are talking about. The kid can hurt himself going to the bathroom. So we sat there while #2 continued to melt down. After about 15 minutes he was not calming down so we left.  I wasn't the only angry parent. There were several Mama's there with upset kids that were leaving early as well. I'm sorry that some kids got hurt, but I don't think everyone needs to be punished for it. As a parent you assume that risk when you take your kids somewhere like that. You sign a release saying you understand that risk. This happened days ago and #2 is still traumatized by it and tears up when he thinks about it. He is currently saying that he never wants to go back to Bounce U again. #3 says he doesn't want to go back because they made his brother sad. Awww....they love each other!