By Jayna Mayer June 07, 2011
Nine months have gone by. It doesn't seem possible. Where did it go? I will be honest. The first 6 months are a blur and there were times (many times) I was not sure we would survive another day. But, the older they get and the more sleep Mr. Mayer and I get the better we are all doing.
These boys had their 9 month check up yesterday. Everything went well and these little dudes are thriving! We (haha, Mr. Mayer) will be taking their 9 month pictures over the weekend. Until then I will share a couple of pictures I snapped over the weekend. 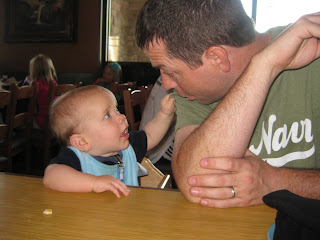 Owen Walter Mayer aka Donkey
My first born
Weight: 19 lbs 3.2 oz (32%)
He weighed 6 lbs 4 oz when he was born.
Height: 27 1/4 inches (17%)
He has two bottom teeth.
He is very chill little dude. Nothing riles him up. He has gotten very chatty over the past month. His Nana Sue loves it. He will sit and look you straight in the eye and jabber his little head off.
He loves his Mama, but is pretty equally attached to Daddy. If he sees Daddy and does not get acknowledged he cries until Daddy comes back and talks to him.
He can say 'Mama' but prefers to say 'Dada.' He reserves 'Mama' for when he is really upset.
He will sit in the toy corner and play by himself for ever.
He sleeps all night. Bedtime is around 6:30 usually and he wakes up between 7:30 and 8:00 in the morning.
When he does wake up he will sit in his crib and play with his pacifier or stuffed animal and never make a peep.
Owen isn't pulling up yet, but has shown and interest. Yesterday he managed to pull himself up in his crib and was very proud of himself.
He has transitioned from the Army crawl to the big boy belly off the floor crawl. He looks like Frankenstein when he does it. Cracks.me.up.
Mr. Owen LOVES to eat. He is learning to self feed and really enjoys Cheerios. He likes anything orange and does not really care for green foods or tart fruits.
He can hold his own bottle for very short period of times. We are working on this skill.
He is my father in law incarnate. He looks like him and has the same even keeled temperament as he did. He even makes the same facial expressions that he used to make.
He likes to give kisses and be snuggled. 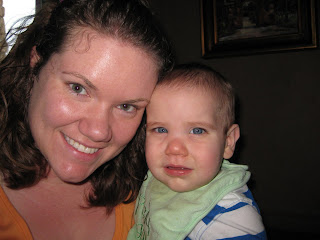 Carter James Mayer aka Shrek
The second born
Weight: 21 lbs 5 oz (62%)
He weighed 7 lbs 8 oz at birth.
Height: 28 inches (41%)
He has two bottom teeth.
I knew when I was pregnant that this one was going to be wild. He was always in constant motion. Nothing has changed. He is always in constant motion.
He is easily upset. If something does not go exactly how he thinks it should he screams.
He doesn't chat like his brother, but he squeals. He thinks it's a really fun game to squeal.
He makes hysterical facial expressions. His favorite is wrinkling his nose up when you look at him.
He's a flirt. If we are in public and there is a warm body anywhere in his vicinity he hones in on them and squeals and smiles at them until they acknowledge he's there.
He's a Mama's boy. He thinks I should be in his line of sight at every moment of his day.
He likes "wrestling" with Daddy..
He likes to touch his brother. I put them in their stroller and he immediately leans over and puts his hand on his brother. He also likes to take the pacifier out of his brother's mouth and put it in his. He then takes the pacifier that he had and gives to his brother.
He can say 'Mama' but prefers to say 'Dada.' Like Owen he saves 'Mama' for when he is upset.
He pulls up and "coasts" on everything. Even the dogs. He has even taken a few steps behind a walker.
He tries to climb. He's going to make me work.
He still Army crawls.
He sleeps all night~ most of the time. Bedtime is around 6:30 usually. He wakes up between 7 and 8 in the morning. He wakes up talking and squealing. He is not content to sit in his crib and play.
Carter loves his food. I have not come across a food he does not like.
He refuses to hold his own bottle unless he is using it as a drum.
He will only snuggle when he's tired. But, likes to give kisses. Usually to the dog.