By Jayna Mayer June 29, 2011
Okay, it's Wednesday. I normally do What She Wore Wednesday.....but I forgot to take a picture this morning. Whoops...so I thought I would catch you up on Shrek and Donkey. These little dudes will be 10 months old this week. Yikes! Already? Let me tell you...they think they are pretty big deals. Both are pulling up and coasting on stuff. Both will walk behind the walker, but decided they get places faster crawling. They have also started fighting with each other. I shouldn't laugh, but it's funny to watch. I'm not the only one who laughs either. Aunt Bets was over the other day and saw the dudes going at it over a hair brush. She thought it was funny to. And, tiny little Donkey is vicious. He may be small but he's tough. I looked over the other day as the dudes were arguing over flicking the door stop and Donkey reached over and grabbed Shrek by his hair and yanked him back. Shrek didn't think it was very funny. Shrek is very dramatic and will poke out his bottom lip and scrunch up his face. Then big alligator tears start pouring down. On top of all that he's very loud and will holler until I pick him up. It reminds me of a certain Diva that lives in the house. Those two are just alike! Bad news for me.
In addition to their personalities starting to shine through they are developing big boy appetites. They have started being very interested in feeding themselves. Mr. Mayer hates this because it is a messy ordeal. We are starting to veer away from baby food and lean more towards real food. We are coasting through an in-between state right now. They are getting a healthy mix I think. They love green beans out of the can. They gobble those up as fast as I can put them out on their high chairs. I made some roasted carrots for them yesterday and they were a big hit as well. Donkey was shrieking at me for more. Last week I made them macaroni and cheese (with orzo pasta). It was so good Diva and I ended up eating it for dinner ourselves. I have a few jars of baby food that is really thin and the boys are really to big for it. I have been making some rice and mixing the two together. It's pretty popular with the dudes. Mr. Mayer likes the rice. I made chicken kabobs for dinner one night last week. I fed the leftover chicken to the dudes. Another success! For breakfast on Sunday they had their first pancakes. These dudes were as big a fans of pancakes as their sister. You would have thought I had never fed them before. This morning they had their first eggs. It was so so. Donkey wasn't wild about his eggs. Shrek, naturally ate them like he might not eat again. I'm not sure if it was the eggs, or the fact that both boys woke up grumpy this morning. I will be trying them again in the very near future. 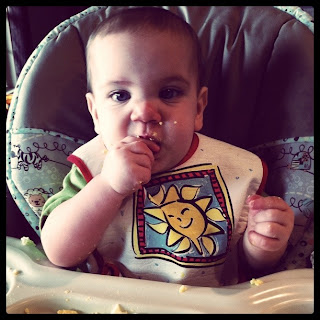 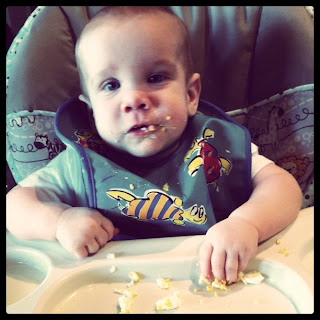 We are still working on sippy cups. I think I had to just go cold turkey with Diva and take all bottles away. I waited until she was 1 to do that though. Yesterday both boys drank a little from a sippy cup. I'm counting it as a success! Mostly they just use them for drums or throw them at each other.
If I'm being honest I'm pretty excited about some of the boys milestones lately. Why? It is making it a smidge easier on me. The boys have been happier and are starting to play with each other. The new foods are making going places easier because I know that I can feed the boys what is available and not have to pack baby food.
As far as sleep goes. Either they are sleeping all night or I am so tired I am sleeping through them waking up at night. Either way, I'm sleeping and coping much better these days. They seem to be thriving so I'm not worried.
Teething is still a problem. Donkey has a bottom tooth just under the surface that hasn't broken through (I'm making an angry face!). Teeth are terrible. They make the boys miserable which makes Mommy miserable. I will be happy when we are done with this phase. All I can say is ibuprofen is getting us through.
Shrek has learned how to take his bibs off. It's time to get them some new ones anyway. I want to find some with snaps. I found a pattern online to make some out of old t-shirts and towels. I'm not crafty. I pretend I am and in my mind I am, but if I'm being honest my crafts look like something Diva does in art class. That being said I fully intend to give those bibs a try. I just need to find time to get to the craft store and buy a few supplies. I'm pretty excited at the prospect.