Football and the Harvest Festival 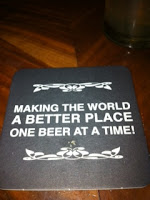 We are big OSU football fans around here. Mr. Mayer graduated from there and so did most of our inner circle. I didn't, but I married into it. Diva is a die hard "Go Pokes" fan and will say anything (including Hooters) orange is the "Go Pokes." She also puts her guns up anytime she sees orange or something OSU. Shrek and Donkey are learning how to raise their arms when someone says "Go Pokes." Silly I know, but it's cheap entertainment. Now that college football is in full swing we spend our Saturday's cheering on our team. This past Saturday was no different. The Pokes played A&M. They squeaked out a victory. Wahoo! We had friends over to watch the game. We ate to much food. Maybe we had a few pre-festival beverages. It was a great afternoon. 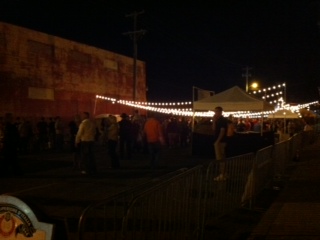 A few weeks ago I had seen my favorite bar ever McNellie's advertising their Harvest Beer Festival. They gather a bunch of micro brewers together and set up tents outside and you go from tent to tent sampling the brews. I thought it sounded like fun. I like micro brewers. I don't know why. But I do. Apparently when I was telling Aunt Bets about it I described micro brewers as "little beers." Yeah, there was some teasing about that. *sigh*
Anyway....after the game we all head downtown for the festival. I'm excited. Mainly because I am getting  out of the house with friends sans kids. This is a big deal for me. We get downtown and get our special commemorative glasses. They gave us real glass. Now, I'm not exactly what you would call coordinated or graceful. I'm a klutz. These people are giving me a real glass to drink beer out of. Naturally I ask what happens if I break my glass. I didn't think it was that absurd. Mr. Mayer nearly stroked out. It was good to know that they would replace my glass in the event I break mine. Whew! By this point I am excited. The friends aren't so much. I don't think they like micro brewers like I do. We walk over to our first tent and get a sample. We are standing there talking about what we all chose from the tent. Mr. Mayer and Brian are there with us. All of a sudden both make a beeline for a gorgeous blond that is standing across from us at another tent. Hmmm...weird. So, we stand there chit chatting amongst each other for a little bit. Slowly realizing that Mr. Mayer and Brian have no intention of returning to our group any time soon. They are still with the gorgeous blond. I hope they know her :/
I get bored. Brian's wife gets irritated that we were just ditched. Bets and Mon are hoping there is better beer down the line. We leave the boys and their "friend" in search of beer. No joke...we make it all the way to the end of the tents and were on our way back up before those boys came to find us. They were mumbling something about her being a recruiter.

Okay...I digress. We made our way through the tents sampling the brews. Some I like. Some I dump in a trash can. We get a little silly. 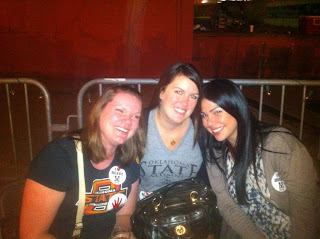 After the festival we make our way into McNellie's for some snacks and drinks. We then make the rounds to a few other places. I have a great time. But, wow! I am tired. I was up way past my bedtime. We go home. Lucky me it's my morning to get up with the kids. Yay! I was pretty worthless on Sunday.