By Jayna Mayer September 13, 2011
We have some friends. They are the friends that we've had forever and more family than friend. The McCurdy's. Mr. Mayer and McCurdy grew up together. I met Kristen and it was instant friendship. We had kids within 3 months of each other and they adore each other. The drawback? They live 2 hours away from us and we don't get to see them real often.
Now that I laid the background I'll get to the point. Mr. Mayer is a little neurotic. Well, I am too, but this is about him, not me. He doesn't like messes (bad since we have a zoo at our house) and he thinks there is a place for everything. This is where brushing teeth comes into the picture. McCurdy (all of them) walk around while they brush their teeth. This drives Mr. Mayer CrAzY. So much so that I think McCurdy makes a point to do it when he is around Mr. Mayer just to needle him. Recently Diva has started walking around while brushing her teeth. Mr. Mayer is about to lose it. Yesterday she was standing in the living room watching TV while she did it. That's her normal spot. Tonight she wandered around the bathroom and climbed up on the vanity and crouched over the sink. 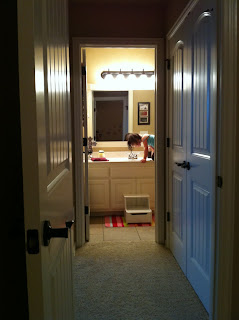