By Jayna Mayer April 06, 2012
Hmph...it's been a hell of a week. When Mr. Mayer and I moved into our house almost 4 years ago the microwave broke a few weeks after we moved in. It was under warranty and it was taken care of within a matter of days by our builder. 3 years later it started acting wonky. I use the microwave a lot. I give the Dudes leftovers for lunch a lot of the time. We are busy people. I plan on leftovers for dinner a couple of times a week. I plan it into my weekly menu's. The Dudes are not patient creatures. I need things to be quick and easy. Mr. Mayer and I had been talking and planning to update my appliances. When the microwave started acting wonky we decided it was a good time to go ahead and update the appliances. Microwave included. We went back to Hahn. We had bought a few other things from them and have always had a really good experience. When something broke we could call and it was fixed quickly and the communication with the Tech's was excellent. I had no hesitation about going back there. In Nov. 2011 (a week before Thanksgiving!) I had a new microwave, oven and stove installed. I should have taken the installation as a warning. 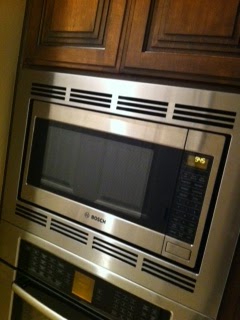 We chose a Bosch brand microwave. It was the one we liked and could agree on. During the installation the Tech had a hard time getting the trim kit to fit the microwave. After trying for a while he discovered they ordered the wrong trim kit for it. He had to order another kit and almost 2 weeks later it was installed.
Fast forward to March 15, 2012. I was trying to make Mr. Mayer some popcorn. The microwave stopped working. WHUCK?! Not again. And, we were leaving in 2 days for a week vacation. Mr. Mayer contacted Hahn the next day. We understood that we would be going out of town and that would extend the repair a little. So, we set up a time for someone to come out the week after we got home. He came out. I explained the issue. He got a cup of water and tried to heat it up in the microwave. It wouldn't even stay on for more than 2 seconds. He determined what the issue was and said he would order the parts. Another week later I get a call saying the parts are in and that my Tech would come out on Tuesday and install the parts. In the midst of this Mr. Mayer had to have an emergency appendectomy. I brought him home from the hospital Tuesday morning. Before I left for the hospital I had a call saying the Tech would be at the house between 2&5. He would call when he was on his way. We were home all day. I was ready to have my microwave fixed. I opened the front door. Carried the telephone around with me. Waited patiently all day. I never left the house. I never wandered far from the living room all day. 6pm rolls around and no one had been to my house. I give the Tech the benefit of the doubt that maybe another job went late. Finally by 7:30 I was calling and leaving Hahn a message. The next morning Hahn called and talked to Mr. Mayer. It's probably best that they did because I went nuts when I found out. Hahn called and said that the Tech said he had called our house the previous afternoon and no one answered so he went to the next job. A Tech can come to our house on Friday, but we need to be sure and be home. WHUCK!!!!!?????? Oh no!!! I have the caller ID to prove that never happened. Needless to say I went crazy. I was so mad I was on the verge of tears (which really ticks me off. Why oh why do I have to cry when I get mad? It makes me even angrier which makes me cry even harder). I called the main Hahn number and talked a manager. I explained that we were home all day, Mr. Mayer is gimpy. We weren't going anywhere. No one called the house. No one came by the house and I was seething mad that not only had the Tech lied at my expense but now I have to wait until the end of the week. The manager went and talked with the service dept. and called me back. The Tech came out later that afternoon. BUT! I went to change Carter's diaper. Mr. Mayer was standing by the front door. The Tech walked up and barley knocked. Mr. Mayer said he could barely hear it standing right by the door. Hello! I have a doorbell. It's there for a reason!! So, Mr. Mayer let him in. He pulled the microwave out installed the parts. And nothing happened. The &*^*^%$# still didn't work. WTF?! He said that he would have to call Bosch and talk with them. He might have to order more parts. He would let me know. That was 2 days ago. I hadn't heard anything. I called Hahn (again. Noticing a pattern?) and inquired about my repair. The receptionist said that she would leave my Tech a message. I had to go get some groceries today and Hahn called while I was out. Mr. Mayer talked with them again. I think they have a 6th sense about when I'm gone. The woman told Mr. Mayer that they had contacted Bosch and ordered some more parts. She gave Mr. Mayer a list of 7 or more different parts that they ordered. Mr. Mayer asked if there was anything in the microwave that wasn't being replaced. Her response :"No. Not really." Again~WTF?! I paid extra for the extended warranty. Wouldn't it be easier to replace the damn microwave?! It's only 4 months old. I shouldn't be having these problems already. Hahn didn't know how long it would take for all the parts to come in. So...another week of no microwave. Needless to say this has been the worst repair experience I have ever had from anywhere. And, I am sadly disappointed with how we have been treated by Hahn. Their communication has been dismal and the repair is taking longer than it should. I'm going to be without a microwave for a month or more when this is all said and done. The thing that makes me the angriest about this whole experience is the lie that the Tech told. I'm a nice person. If he had called and said he wasn't going to make, he was going to be later, or could he come the following day I would have been fine with that. But, the fact he lied and expected me to not protest really makes me angry.