On The Edge of Insanity 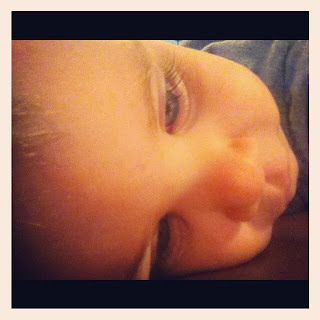 I really may lose my schmidt if something doesn't give~soon. I love my kids. I really do love my kids to death. I try to keep my patience and not completely lose it. Some days are more challenging than others. Today being one of those more challenging days. Actually the past 4 days have been a challenge. Earlier in the week Owen woke up from his nap with a fever. No other symptoms. Just a 101 degree fever and he was pretty lethargic. By the following afternoon he was back to normal. Right on cue Carter gets the very same fever 2 days later. The fever hangs on a little bit longer than Owen's did. He is a little bit more lethargic than Owen was. He just doesn't bounce back like Owen did. The first day of his fever he did not nap. He laid in his bedroom and cried and screamed and moaned the entire time. That night was much of the same. That was 4 days ago. His fever broke a couple of days ago. He has continued to scream, cry and moan his way through nap times and at night. He has also decided to scream and cry his way through his awake hours. I am to the point I feel like screaming and crying with him. Last night was the worst. He laid in his room from 8pm to 1am screaming, moaning, crying and yelling "Mama!" How heartbreaking is that?! I almost couldn't stand it. I rocked him. I patted his back. I gave him medicine. I covered him with a blanket. I took the blanket off. I finally just laid down in the room next door and listened to him cry because I was out of ideas. He cried himself to sleep around 1am and was back up and crying at 6:30am. *Sigh* We thought that maybe getting out of the house would be helpful. We took him to a birthday party for one of Olivia's little friends. It was at a park. It went okay. He didn't cry~as much. In between the crying he just looks miserable. I feel terrible because I have no idea what is troubling him. I know he doesn't feel good. I thought maybe he was cutting a tooth. Mr. Mayer held him down this morning and looked in his mouth with a flashlight. There was nothing in there. Not even a red spot. Poop. Allergies? Maybe. He's not sneezing, scratching or having a runny anything. He's not constipated~by any means. No fever anymore. He does have a weird looking diaper rash. It's bumpy, almost like little bitty pimples (kinda like heat rash looks). It has never looked like that before. I am putting cream and powder all over his tushie. After the party we had a moment of insanity and decided to go get some dinner. Dumb A$$ is all I have to say about Mr. Mayer and I. I ended up holding Carter and eventually standing outside with Carter while Mr. Mayer, Owen and Olivia ate their dinner. In addition to the endless crying he hasn't eaten much of anything in days. Even his very favorite foods have barely gotten a glance from him. The dogs have been very happy this week. We came home from our very disastrous dinner and let the kids go in the back yard and play. Carter was reasonably happy for a good hour, maybe even hour and a half. It was so nice to have a little calm. Tonight he is in bed. Crying. I am out of ideas. I suspect that the baby monitor will be turned off and Mr. Mayer has mentioned something about ear plugs. I am open to suggestions. I have reached the end of my ideas. This kid is getting the best of me.