By Jayna Mayer August 11, 2011
I've been MIA for a while. Where have I been? Vacation. I intended my first post to be about my vacation and how much fun we had. This week has changed my mind.
Let me preface this next part by saying my kids were rock stars on vacation. They endured 12+ hours one way in the car like champs and tolerated schedule disruptions and time changes like nothing was happening. We get home and it all falls apart. 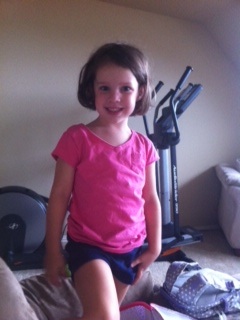 Diva is officially done with daycare. She will start "big girl school" in a few weeks. In the meantime she's home with me. Normally when she's home with me it's no big deal she does pretty well and there isn't much drama. Normally. The first couple of days I chalked up the behavior to just coming back from vacation. But, really. I mean c'mon. Diva has been living up to her name lately. As many know we have had some potty training issues. Really, we've had problems with Diva not feeling the need to go to the potty, she just pees in her pants. She went almost a year without many accidents and then last summer it all went downhill. She will go a few weeks accident free and then we will start all over again. She hasn't had an accident in about a month. She traveled cross country without any accidents. Though~she did wear two pairs of panties on the way home. When I asked her why she said it was in case she had an accident she would have another pair. I love her logic.
Okay, back to point. We get home and Monday she has stopped going to the potty. She just pees in her pants. It is the most frustrating thing in the entire world because I know she can go accident free. I can't help but question myself and if it's something I'm doing.
In addition to the pee situation we have had attitude that is out of this world. I mean, worse than ever. For example~She had been asking for macaroni and cheese so I made them some yesterday for lunch. I had some leftover meatballs I heated up with it. She decided she didn't want meatballs she wanted me to make her chicken nuggets. When I said no it turned into a door slamming, screaming, kicking, throwing fit. She didn't get nuggets. The dogs ate the meatballs. I should have spanked her, put her in time out, something. I yelled at her and told her she was not going to keep treating me that way and made her sit at the table and eat her lunch. She's been throwing fits like that several times a day all week. The boys just stared at her. The day continued to go downhill. Fast forward to this morning. We are back to wearing a pull up at night. I told her to take her pull up off and put panties on. Another screaming, stomping, slamming fit because she didn't want to. I spanked her. Then made her sit in time out. Then told her that she was not going to act that way anymore. She's been pretty good the rest of the morning. We will see how the rest of the day progresses.
Then there are boys....
I'll start with Donkey. 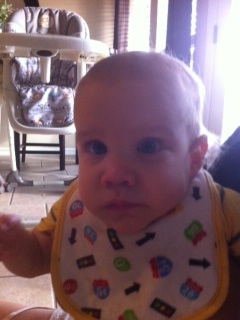 He's mild mannered, doesn't get his feathers ruffled about anything, pretty even keeled and ridiculously happy. Both boys are busy and into EVERYTHING. It's exhausting. Sunday I had the oven on. It's one of those ovens that is cool to the touch when it's on. It has a vent though on the bottom. I didn't realize it go so hot in the vent. Donkey was coasting around and I saw him going to the oven. I get up and start heading his way. Before I can get to him he sticks his hand in the vent and starts screaming. Great. I yank him up and look at his hand and see....Nothing.Nada.Not a thing. His hand was a little red, but nothing alarming. I calmed him down and he went about his business the rest of the day like nothing had ever happened. KiKi is with us again this week (which means the week should be pretty easy with an extra set of hands). She was changing Donkey's diaper that afternoon and noticed blisters on his hand. WHUCK?! Yup, I'm top notch. I had not even noticed that two of his finger tips had blisters on them. One finger looked a little red and angry. I didn't know what to do so I called the doctor. I worked child abuse long enough to know how serious burns can be. I'll admit I was freaking a little. Mostly about not noticing that the little bean had blisters. I'm feeling pretty low at this point. I talked to the nurse. She said as long as he was behaving normally and using his hand not to do anything. Okay, I can handle that.
Nothing else can happen this week, right?
I have a 3rd child. My trouble making, into everything, dramatic little boy. Oh, that's right. There is still Shrek. He's extremely busy. More so than his brother. And, he's very dramatic. Similar to Diva. He's crawling around this morning doing his thing. I'm sitting at the kitchen table and he's crawling under the table. Diva comes over. Now...I'm not exactly sure how the next chain of events happens. We've had a problem with convincing Diva to not pick her brother's up because she always drops them. I'm not sure if she picked Shrek up, bumped him, or he fell on his own. They were both down at my feet and I saw out of the corner of my eye Shrek fall into the chair. There was screaming. Diva was saying "I didn't do it!" I calmly (still thinking it's no big deal) pick Shrek up. He is beyond hysterical. I then notice the blood. Everywhere. Gushing out of mouth. His lip is swelling fast. I get a rag and try to start cleaning him up and calm him down. He won't let me look in his mouth. I can't tell how bad it is. I decide to call the doctor. I leave a message for the nurse (I'm fairly convinced they are going to report me). I tell Mr. Mayer and he texts me and says "welcome to parenthood of boys." Thanks Hon, that really helps me right now. In the meantime I try to ice his lip and get a better look. From what I can tell the inside of his lip is cut and the outside is purple. The bleeding stopped. The nurse calls back and we talk about it. I tell her that I can see a little cut but the bleeding has stopped. I told her I'm giving him a frozen teether. She said to keep doing that or a Popsicle to help with the swelling. Neither picture does him justice. He wouldn't sit still and pose so I could get a decent one. I mean, the nerve! 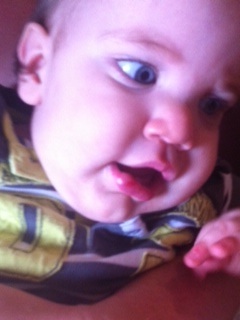 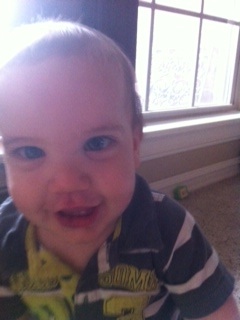 I am feeling pretty unsuccessful at this mommy hood thing today. The week has gone so badly that the teenager is telling me to take a shower and disappear for a few hours and she will watch the kids. I think I may take her up on her offer. I need a time out.