By Jayna Mayer February 28, 2012
I think I just threw up a little. As I have previously stated here and here I don't like poop. 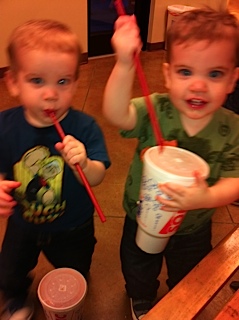 These precious little shit bomb angels had a bath tonight. Mr. Mayer was cleaning the kitchen up after dinner and the Diva and I were doing the bath. They were washed and just playing in the tub. I step out and grab the humidifier and step back in and fill it up. I step back in (literally it's only 5 steps, maybe) and Carter is taking a bite of something. First glance I think it's a bath toy. I step a little closer and he holds it out to me. I instinctively hold my hand out. Carter places a turd in my hand. HE JUST TOOK A BITE OF A TURD!!!!! I think I just threw up a little more typing this. Now. I'm not certain of the culprit. I'm assuming the poo-er is Owen. He went a little just before he got in the bath. I guess he wasn't finished. Either way...I start shrieking. Mr. Mayer comes in and laughs at me. He calmly suggest that maybe it wasn't a turd. I direct him towards the trash can where I threw the turd. Okay. Maybe Carter didn't really take a bite. He had some on his chin and I stood there and watched him take a bite. Dis-gust-ing. Mr. Mayer helps clean the dudes up~again. I dry and lotion. They have terrible horrible no good diaper rash right now so we are letting them run amok in the living room-diaper less. I think I may regret this decision.
I'm nauseous. My kid just ate poop. Again!
And, in an effort to not disappoint Owen just pooped in the living room floor. Naked time is over! At least Mr. Mayer picked it up before the dogs or Carter ate it.